5th August 2010 - Today was a typical LEJOG day in terms of distance, and was set to be a day of heavy rain. But fortunately we seemed to miss all of the rain and didn't see a single drop. The temperature was still a fair bit lower than England, the high only being around 17C. We set off following Loch Ness up to its most northern point. The route was quite scenic, although the road often moved away from the loch to the point that you couldn't really see much apart from trees. The roads were typically very fast, and on occasion dual carriage way, which wasn't terrible pleasant. We passed through a few small towns, Beauly was very nice (we sat outside the old church) and walked around the ruins. As we left Dingwall we had to join some dual carriageway (part of the A9), but this ranked as something similar to the A1. It was fast moving dual carriageway, with plenty of lorries zooming past us. I lead and pushed a fast pace, as I find it's safer if you're going as close to the speed of the traffic as possible, and also so that it was over sooner. Once we were off the A9 the roads became a lot more enjoyable. They still weren't country lanes, and we couldn't go side-by-side, but they were a long way better than what we'd just been on. We also knew it was the last of the really busy, fast roads we'd have to go on which was a relief.

In fact the roads became quite nice and the landscape totally changed as we passed Stittenham. It didn't feel or look like Scotland. We could have been in Canada or eastern Europe. There were forests all around us, looking very untouched and earthy. We couldn't go side by side much, but the roads were still really nice with barely a car on them. We then descended down towards Easter Fern having climbed to around 600ft. The views were quite amazing looking over the hills and loch. The roads down were also super quick, we hit around 60kph or more. 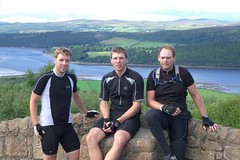 As we got close to Carbisdale castle I pushed the guys to stop for a coffee and scone. We found a nice coffee shop in Argay that sold random, and quite quaint items. It wasn't expensive either. This was one regret from passing through Scotland. As a child spending holidays up there seeing the family, we'd often go to all sorts of amazing tea houses. On our trip we certainly passed a few, so based in castle's (like Dunrobin) but we didn't really have the time to stop (and I don't think the guys were totally sold on the idea). But after the experience of the coffee shop in Argay I think we all wished we had done a few more tea rooms (so much so that we spent a fair bit of time in a tea room in Thurso).

The castle took quite a while to reach. The road approaching it was very scenic, although seemed to take ages to cycle up, as did the long driveway in the castle grounds. It was was quite amazing to see and stay in although still not one of my favourites. We put our bikes in the open, but sheltered storage and walked around the grounds. Inside it was very grand, with room after room it was easy to get lost inside. The drying room was a bit of a disappointment, not being very hot, and also stacked full of soaking kayaking gear. It was a long way from the nearest pub which was a shame, so we were forced to stay in for the night.