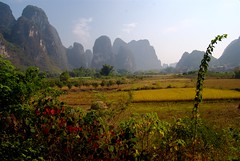 3 flights and a coach trip (on 21/11/2010). So far so good but a few hiccups along the way. I forgot to note down which terminal I was leaving from at Heathrow. It wasn't Terminal 3. I eventually got to Terminal 4 to find my flight had been delayed by 45 minutes. Terminal 4 was surprisingly pleasant compared to the chaos of Terminal 3. Not a single queue and the flight was only a quarter full so I had a whole row of seats to myself.

I landed in Paris which had severe fog and very low cloud cover (what was causing all of the delays). I originally had 1h 15mins for my switch over, but being 45 minutes late I had to run! Annoyingly, the security made me take out my camera and laptop when putting my bag through the scanner, which spoilt my inch perfect packing. Taking a carry-on bag instead of checking a bag in was worth it thought given how I was the last one to board the flight.

The plane left the terminal and then sat on the runway for about an hour (!) waiting in-line to take-off. Another strange flight, this time not even 1/5 full. I again got a whole row of seats to myself. I now know why my flights were so cheap though, given the 4 channels I could watch (in French and Chinese) the "chicken" which may have been my first experience of dog, and the odd people dotted around the plane. The service was a little too quick in collecting our food trays. I just about finished (and I'm no slouch, "the machine" or "pig" are common names thrown around) and they were collecting my tray. Thankfully my speed for once worked in my favour. In fact fast eating seems to be commonplace in China... I should fit in just fine.

For some reason after the food they turned off the lights for every one to sleep. It was 1pm GMT. They then woke us at what was 6pm (GMT) / 2am Beijing. So by the time I arrived at Ghanzhou I had been up since 2am local time...great. The service was quite awful. One poor guy across from me on multiple occassions would ask about the food, or for water and the stewardess would completely blank/ignore him... not even eye contact. She rolled her eyes on one occassion. It was one of the worst flights I've been on, however it got me where I wanted to go. I just kept to myself and watched movies on my laptop.

Guilin wasn't a problem, the shuttle bus leaves from right outside the station. It costs Y20 to get into town. I then got a taxi for Y10 (either get it on the meter, or don't pay over 10) to the bus station. The bus station looks a little hectic, but just ask for a ticket to Yangshuo, which costs Y15, and walk around to the buses. It took around an hour to get to Yangshuo. I did try sleeping, but the driver seemed intent on beeping everyone we passed (a common thing here), and couldn't pull away in first without the whole coach jolting. 21 hours after getting up I had arrived at my hostel in Yangshou. It had been quite a draining journey with all the switching.