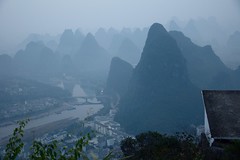 At first, Yangshuo wasn't quite what I had hoped for. It's quite the tourist magnet especially around the centre of the town. Once you get away from the town it all starts to change. Especially staying there for a while, you learn the town and people and then you really see the true beauty of it. Bikes can be hired for Y5, and you can cycle off to some amazing places. In fact if you want to go to the hot springs / mud baths, or climbing, or rafting, it's the best way to get around. It takes some getting used to. Firstly the awkward bikes, at least compared to what I'm used to riding. And secondly the traffic, which I'm sort of used to due to London, it's just the randomness when you reach a turning or roundabout that keeps you alert. After a day you should have adjusted, and you'll find the system...just works. I can't explain it but I preferred cycling in the madness of Yangshuo to any part of London. 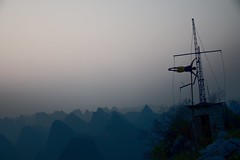 The hot springs were worth going to. You venture deep inside the caves there, it's just a shame they've put so many walkways and lights in as it ruins the experience. Head torches would have been much more fun. We went around unscrewing the bulbs much to our guide, Mary's, annoyance but it actually made the whole place look a lot better (you got a better sense of depth). The Chinese, when guiding you around, instead of explaining how old things are, or talking about how they were formed, simply relate things to shapes. So during our tour we saw rocks that looked like a burger, elephant, tortoise, and fish. The mud pit was a little disappointing as far as mud pits go, too shallow. It was fun though as we chased off other Chinese tourist whilst covered head to toe in mud. The hot pools were nice, but space is a bit of a premium if you want to be in the hottest part (the closer to the top the better). We all managed to squeeze in and chill out for 30 minutes.

For walking, in Yangshuo we found a path that leads up to the tv tower. It's a fairly steep, hard walk, but you get great views of the sunset (around 6pm in November) and sunrise (around 7am), the sunrise being the more dramatic of the two. It's very high up so you also get good views looking down into Yangshuo.

I've still not adapted to the litering and horrible yacking noise that people make, followed by spitting on the street. I've seen the markets, which stank, and the dogs in cages ready to be slaughtered is quite an odd thing to see. They have dogs hanging up, skinned, just like at a butchers, and a couple of meters behind, some live dogs in cages barking away (obviously aware what's happened to their fellow dog). Quite a few people have dogs as pets (as you walk around), so is it food or a pet? It seems to depend on the breed.

One thing I've learnt is never to let another person shave my face, especially if it costs £1. Al and I went to get shaved in Yangshuo. I went first, it was basically shaving with a classic razor by ripping the hairs out. There were no oils, or shaving foam involved, just a straight dry shave. I held back a bit letting Al know how painful it was so that he didn't miss out, and went back to the hostel to finish off the job with my Gillette razor.