Our latter days were a little more relaxed. We walked north out of Yangshuo along the river towards Guilin. There's a great path, well tarmacked for cycling that runs for at least 10km. After about 45 minutes we were around 2km out, well away from any tourism, but decided to turn back to get lunch and rent some bikes as we'd be able to cover a lot more distance. After lunch, by the time we got back out, it was 2pm which was a mistake as the tourist boats from Guilin were ferrying in hoards of people by then, so the beginning part of our cycle route involved a lot of swerving and dodging of Chinese and American tourists. It was quite good fun though.

We cycled 3-4km north from Yangshuo looking for a nice place to swim in the river. Firstly, it was absolutely freezing so I wouldn't have gone in. And secondly, due to the sheer number of ferries going up and down the river from Guilin, the river wasn't very nice (a bit polluted and too busy). Instead we found a shingle beach, and messed around skimming rocks across the river, then walked up a nearby river. It reminded me of being a kid again venturing off into the forests back near home. Later we (our now rather tight room group of Al, Ian, Pat, Yas and I) went for dinner, and all tried pig trotters. They boil the skin of the trotter, and that's what you eat along with the meat around the leg. It doesn't taste "too" bad, but the jelly-like, chewy texture isn't very nice at all. It was quickly washed down with a couple of beers. 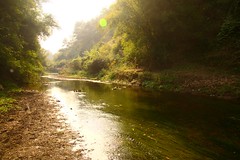 On our last day we got up at 4am to go and watch the sunrise. It was the same walk as the first day, up the hill to the tv tower but in the moonlight. It was a fairly hard work (you build up quite a sweat in the humidity) but enjoyable. Once at the top, we climbed around the "do not enter" fence, and sat on top of the guard's house to watch the sunrise. He eventually noticed/heard us, and came out. He was annoyed at how we'd got back in again and asked for Y100. We offered him Y50 (which he took) and some cigarettes to which he replied in Chinese, "I can't smoke, I have to walk up this f*cking hill every day". Brilliant. We promised we wouldn't come into the restricted area again, and he left us to watch the sunrise.

In the afternoon we popped out to West street and each bought a fake North Face soft shell jacket. The quality isn't too bad. We looked for ones where the seams had been properly sealed inside. The jackets are waterproof, although I think it may just be a temporary spray put on them as Al's jackets (which he bought a couple of weeks before) has started to absorb rain rather than bead it. The jackets cost us Y170 each, which was a very good deal and about as low as they were willing to go.

For dinner we had claypot. I opted for a chicken claypot despite being warned against it. When the Chinese prepare the chicken they often chop it up with a massive cleaver, but they chop it with the bones still in it. So you end up with bits of chicken with bone fragments on them. Plus... well let's just say I don't think I was eating parts as nice as the breast. In the evening I gave my first lesson in teaching English with Celina. I decided to work on pronunciation, which was a struggle, but we both had a good laugh. It's something I wouldn't mind doing again, although on my own terms (ie not a job).