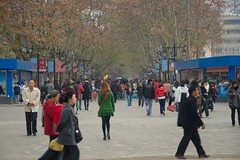 After Yangshuo we spent a lot of time, one of our first destinations being Kunming. Our group of 5 which had become quite close-nit and was generally a great laugh was disbanded. Yas left first to head to Hinnan. Al and I later left to catch the bus to Guilin (in order to fly to Kunming). The other two, Ian and Pat, popped down to say goodbye. It was shame, as I had become quite comfortable in Yangshuo and enjoyed the mix, banter and laughs within the group that had formed over the past 5 days. I didn't know it yet, but the setup we had at Yangshuo was the best of the holiday. Great company, good laughs, a bar the floor above us, cheap living, friendly hostel staff, and Yangshuo, which had by now grown on me. I would have stayed there longer if I had the chance, in fact it may be a place I re-visit (out of season) when possibly going to see Tibet. 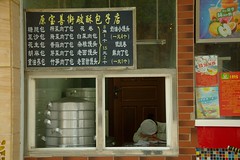 A day later we were in Kunming which was colder than Yangshuo or Guilin (probably around a 10C high). We walked around town for a few hours buying some tea. I don't really know enough about tea, so it's hard to know what to buy and if you are getting a good deal. I bought some litchi tea which has a beautiful fragrance for 100y for around 140 grams worth. I think 60y would have been a better price, but it's hard to be sure due to the different ages of the teas. You can also get clay pots, again I don't know about quality, but I wouldn't pay over 70y for one. Many people had flasks for carrying tea, which I looked into getting. I wanted a blushed aluminium flask, but in the end couldn't find one. I've since bought one on Amazon for £6 (which I can't find now, but there are plenty on there) which is the same price as I would have paid in China.

Walking around I took some photos, but am finding it very difficult to capture China by photo. Talking with Al, we made a list of things China doesn't do so well.

If you do travel to China bring some proper coffee, chocolate, and pencil sharpeners. Oh, and a few decent "learn English" books. They're valuable commodities and can earn you a friend, or even a unique gift in return. Mainly to give to a girl as they're generally a lot more open, and fun (you can say almost anything and they'll giggle).