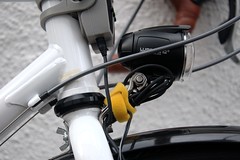 On my new tourer, a Genesis Croix De Fer, I've recently installed a SON28 dynamo, Dahon Reecharge battery and IQ Cyo front light. I've got it working beautifully, but it wasn't quite as simple an installation as I had hoped. Having to hook up wiring using spade terminals and crimping tools proved awkward and not as solid as I would like. So I set about using solder and bullet plugs. This is what I learnt from the experience.

To make things easy for myself, I ordered a new wheel from Spa Cycles. To be exact, a 700C, 36-spoke wheel with Rigida Synper rims and a SON28 with a 6-bolt disc mount. They usually have a backlog of wheels on order so be sure to order in advance (mine took 2 weeks).

The Croix De Fer by default has centre-lock disc rotors. So I've had to buy a new Shimano 160mm 6-bolt rotor (for £17). This works out well as I now have two interchangeable wheels both with their own rotors. I attached the 6-bolt rotor to my new wheel and put it on the bike, first step done!

Alternatively I could have opted for a Shimano T665 Dynamo Hub. It comes with a centre-lock rotor mount, rather than the 6-bolt. This would have been more ideal, as the hub is cheaper, from what I've read just as good, and would mean I don't have two types of rotor mount on my bike. It's not hugely available though, and the SON28 looks like a better long-term investment.

Wiring Up The Dynamo

This step is where things got a bit messy. It's worth taking your time, and allowing for mistakes. 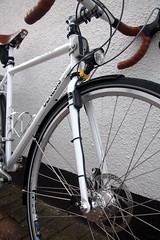 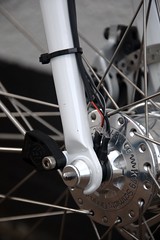 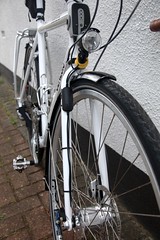 Phew, all done, and a good save. In retrospect I really don't like the spade attachments for the dynamo. They're very fiddly. I can't help but think there should be an easier way, especially if you want to dismantle it in future.

Cars often come with rubber seals that go over the spades. I had a few kicking around but they were slightly too big. This would have been a much nicer solution had they fit.

The IQ Cyo cable fits perfectly under the regulator for the Dahon Reecharge.

I ran them down the fork, and secured them further down the fork with some 142mm length, 3.2mm wide cable ties. These were also bought from Maplin (in a pack of 100) and can be used to hold the regulator (should I need to cut the supplied cable ties).

There is quite a bit of excess cabling from the Reecharge regulator to the battery unit. There's not much you can do about this. I neatly bundled it up and used a velcro tie to hold it to the underside of my IQ Cyo mount.

With the IQ Cyo attached at the top of the front forks, and the Dahon Reecharge around my head tube they were making contact. Upon turning the handlebars it would cause either the regulator cable to pop out of the battery unit, or the light to move from its central position.

To fix this, I took off the IQ Cyo and removed the light from its frame. Placing the frame in a vice, I bent it so that the angle is flatter (and not so up right). This means the light will sit a little further forward and also slightly lower, but it stops it making contact with the Dahon Reecharge. Ignore the photo, it shows the mount slightly bent, although I have since bent it further to increase the distance between the two devices.

It doesn't come with any bolts or means of attaching it to your bike. Luckily I had a spare allen bolt that was long enough to fit through the front fork. It currently holds my IQ Cyo and SKS Chromoplastic front mudguard.

I used a butterfly clip for easy adjustment rather than a standard nut. Also the IQ Cyo's mount is slightly wide, so I placed a washer on the allen bolt to help apply pressure more effectively and stop it moving about.

To reduce the amount of cable clutter, I've bought a 50cm USB extension cable (male at one end, female at the other). This runs from the Dahon battery unit, up into my Ortlieb bar bag.

Inside my bar bag, I plug my devices for charging into the USB extension cable. This works great for my Android phone (ZTE Blade) and Kindle.

However, my Garmin Edge 705 goes into "data transfer mode", ie thinks it's plugged into a PC. In this state you can't use it! Useless. Anyway, the Dahon Reecharge comes with a number of attachments. One of them is an iPhone USB attachment. An adapter with male on one end, and female on the other. Much like my extension cable, except that it's wired differently. The data wires in the adapter aren't hooked up, so the Garmin doesn't think it's hooked up to a pc. Voila, I can charge and use my Garmin at the same time!