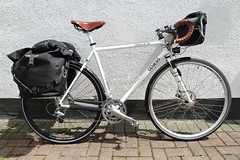 While I really like my Genesis Croix De Fer I am left frustrated by it. A good bike but not quite perfect. There are a few simple changes in the specification Genesis could have made to push it that little bit closer to being a perfect bike. I use mine as a road bike, on odd trails and cross country, and also as a tourer. So it gets varied use, yet under all of those uses it's not quite right. For now I plan on using all of the components to death, but at the first chance I will be changing the set-up.

Changes I Should Have Made