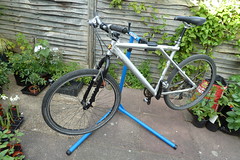 Going back to around 1997 or 1998 my brother bought a second-hand GT Avalanche for mucking about on when we were in our teens. It stood up to all that that abuse and around 2003 my brother took it to university. It then returned home and was used for commuting for a couple of years. It finally got left to rot around 2007 in the garage, and I've since decided to bring it back to life.

It came with a set of old Rockshox forks (I have no idea what model, as all the paint had stripped off) that had around 80mm worth of travel. I replaced these with some Surly Instigators. These are longer than standard forks to make up for the travel my original Rockshox otherwise the geometry of the bike wouldn't be balanced. They cost me £70 which was more than I had wanted to spend. I could watched on eBay and maybe have picked up a pair for £30-40 but didn't have the patience. I made the mistake of cutting the steerer 1cm too short. A frustrating mistake as I should have left additional length as it can easily be taken up using spacers. It was easily fixed though. The existing stem had a 5cm stack height, I simply bought a new FSA stem with a 4cm stack height meaning an additional £7 expense.

The headset had rusted up and needed to be completed replaced. I picked up an FSA Pig 1.1/8" headset for £15. It was fairly easy to fit even without a proper headset removal tool to get the old one out. 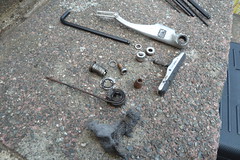 Much of the outer cable housing had worn through for the brakes and shifters, exposing rusty cabling. I replaced these and bought new shifter and brake cables for around £15. Many of the allen bolts holding cables or levers on the handlebars had been rounded. It was a case of finding a bike shop that could supply me with the relevant bolts as replacements. The brakes, after a full strip down and clean, where still functional. I just needed some new pads as the existing ones had worn a little thin.

The quick release rods had rusted to the axles, so needed to be removed. I bought standard allen key release rods purely to make the wheels harder to pinch. I picked up a cheap pair (front and rear) for £5 in my local bike shop. The hubs are in good conditioned and just needed to be stripped and re-greased. I am however missing the rubber dust seals on the front hub so the ball bearings are exposed. I'm still trying to find a shop where I can buy these at.

The bike currently has a pair of old Continental Contact 26x1.75" tyres on it. I've ordered some Schwalbe Marathin 26x1.5" tyres for £40 would will reduce roll resistance, make it puncture resistant and last a few thousand kilometres.

£190, although I could have easily cut that down to around £110 if I had bought the forks on eBay, not bothered with new tyres, and not made the mistake meaning I needed a new stem. I could have also opted for slightly cheaper grips. Still not too bad, I wouldn't have been able to buy a bike that nice (or now in such good condition) for that price, and it's brought a bike back to live (and kept it off a landfill).