To get across France I first had to get out of London and across the English Channel. The day before I left it had been 32C and sunny skies. The day I left had tropical thunderstorms and heavy down pours. Not the ideal start.

Luckily I managed to dodge most of the rain and quickly cycled across the Kent countryside. A route I really enjoyed, and will do again when I return as the county is full of cider and ale farms. The smell fills the air making the journey quite pleasant. I arrived at Canterbury by 1800 and quickly had a look around town. A small city with a nice mix of old and new and plenty of decent pubs and restaurants to get your fill. If I didn't have a Eurotunnel ticket booked for the following day I would have stayed another night. 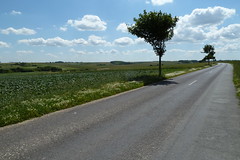 I woke at 5am the next morning and cycled to Folkestone. It was a bit of a panic with a few things going wrong (the bottom bracket on the bike and poor routing by the GPS) and I arrived just in time. Cyclists can get across at either 0800 or 1530 for £16 courtesy of a service from Eurotunnel. 45 minutes later I was in France and starting my journey.

The five days across the north-east of France turned out to be harder than I had expected. Cycling solo was something new to me, I wasn't used to 8 hours of sun per day and my level of fitness was relatively low. So I struggled through a few of the days, wondering why I had decided to take on such a journey when I could be sat at home enjoying a cold beer. To make matters worse I was stealth camping, so no showers, people to meet, or cold beer. The only company I had were the insects biting me. By about the 4th day I booked myself into a hotel after cycling 110km and enjoyed a bit of luxury. It was enough to settle my mind and allow me a decent night's sleep. 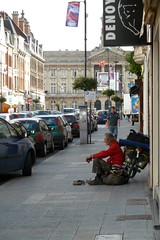 Unfortunately not much else happened in France. No characters to speak of (due to stealth camping for the majority of it). For cycling, the roads were great, drivers very cycle friendly and the countryside flat and picturesque, which made it perfect bicycle country. The stealth camping was also great given how sparsely populated and flat some parts of north-east France are. It was a part of the journey that was more about me getting used to the bike and concept of cycling so far rather than meeting people.

The people I met were always very friendly, although I didn't meet too many people as most shops seem to spend more time closed than open in France. "Tabac" shops/bars were very common in France. I'd often stop in to find them full of locals, and join them by having a beer. On one occasion I was trying to figure out what the menu was, but eventually discovered there was no menu as they were only serving steak and chips! And instead of showing Wimbledon (the semi's), they had horse chariot racing on tv?!?

Finding water and food was often a frustration. Getting bread wasn't too much of a problem as every town always had a bakery and a hair dresser. Finding a super market that was open so that I could buy a filling for my bread was often tricky. I would usually look just outside of a large town near the busy roads. I also had my first Royale with Cheese in a McDonald's which I couldn't resist having watched Pulp Fiction so many times. On the whole though France was nice to pedal through, but often felt sleepy or dormant which made the experience a little boring.