The roads out of France across the Ardennes and into Lorraine were great. Fast, smooth and very picturesque. It was a Sunday too so fairly quiet in terms of traffic. However, once I left France, southern Belgium was a big disappointment. Very industrial and lacking any type of character. It seemed to smell of asparagus too. It was nothing to write home about so I churned through the 50km of Belgium quickly to get on to Luxembourg in the hope it would be more interesting.

Thankfully it was better (on both counts). A bit more character started to return to the surroundings, and I even managed to take in a pro-cycle race (unfortunately it wasn't Le Tour). Entering Luxembourg city was like any other city, lots of cars and busy roads so my pace slowed. Once I reached the centre I continued on foot. The centre is pedestrianised and mostly cobbled streets lined with fashion shops, cafes and restaurants. My only day there was a Sunday, but despite that restaurants were packed, people sat out in the main square, and live music played in one of the smaller squares. This continued until well after midnight. I took in a few beers and enjoyed a pizza while people watching in the square. It wasn't cheap! 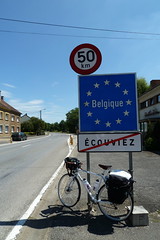 Unfortunately the hostel was fully booked the next day. Because of this I had booked ahead to stay at a hotel in Trier but without knowing how much I'd enjoy Luxembourg. Otherwise I would have looked for somewhere else to stay to spend an additional day there. The hostel was a large hostel that had the decor and character of a hospital. It wasn't a great hostel (I tend not to like larger family based one) but at €20 the location was perfect.

The next morning I had breakfast in town and sat outside a cafe watching Luxembourg slowly awaken. I got on the bike and started my cycle towards Germany.