Having quickly passed through France, Belgium and Luxembourg, Germany was the next country for me to cross. In terms of pure road cycling it's not the most pleasant experience. The roads connecting towns are fast, busy and often have no hard shoulder (which I had become accustomed to in France). German drivers just seem to want to get from A to B as quickly and as efficiently (in true German style) as possible. The speed and how close they passed made me a little nervous. 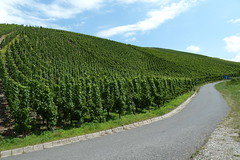 However, I soon discovered a huge cycle network that links up the whole country. Why go in the roads when there are cycle paths everywhere. The more of Germany I passed through the more I realised what a large cycle culture it has. Around many cities and along the rivers there are cycle paths, all clearly marked (with distances) and sign posted. It makes for a great cycle experience as you're often well away from the traffic. On occasion the cycle path becomes a dirt track, or the tarmac is bumpy, but in general it's the most impressive cycle network arguably in the world. You can easily cross the country in multiple directions just by using cycle paths. It puts to shame the cycle infrastructure we have in the UK. 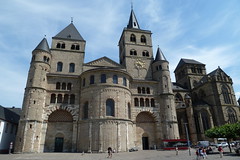 My first stop was the oldest city in Germany, Trier. Unfortunately I stayed in a rather boring hotel, a long way from anything interesting so there were no real stories to tell. Cycling through one of the main wine regions in Germany along the river Moselle was excellent though. It wasn't until my next hostel near Mainz that I finally started to meet people of interest.

The first guy I met was a builder who couldn't speak much English (he was Czech) so I just watched his evening routine at the hostel. After a 12 hour day working on a building site he would come back, check Facebook while listening to German pop music, eat a doner kebab, neck a beer then go to bed. A truly hard lifestyle. I later found out the hostel is commonly used for builders to stay at while they work in Mainz. Guys will come from the Baltic states to earn a little more money than they would at home. 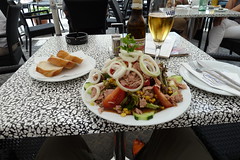 Earlier the Russian hostel owner, Andre, invited me for tea, so we sat outside talking about London as his sister was to visit soon. At one point he asked me to follow him and went down into a dark concrete basement. I followed innocently, but in the back of my mind was thinking of Pulp Fiction. I didn't really want a gimp ball strapped in my mouth, or for the brothers to get medieval on my ass yet I still followed. Fortunately he just wanted to show me the generator he had powering the building and providing the hot water. He was genuinely quite proud of it. I used my Grand Designs knowledge to talk to him about energy efficient homes. Later in the evening I told him I had cycled around Mainz, so not actually been through it. He insisted I see it and said he would drive me there, but only if I help him pick up a bed in his van on the way. So I did, it was all a bit random. I also bumped into my first proper tourers. A retired Australian couple, ironically from Perth and they used to be software developers. So we had plenty to talk about and compare notes on. 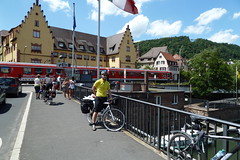 The next day I continued on my way to Wurzburg. Unable to find a suitable stealth camping spot, I opted for a campsite. I pitched my tent next to a guy called Fritz. He was a 60-something year old German guy who was kayacking along the river, 30km each day. He couldn't speak English but we managed to communicate, worse case by me drawing really bad diagrams in my notepad. He even offered me a beer and some tobacco if I had a pipe (God knows why he thought I might have a pipe). I left him sat on his little camping stool, drinking beer and smoking his pipe to go and have some dinner. When I came back 3 hours later he was still sat in exactly the same position smiling happily away. 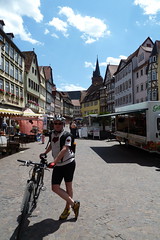 Getting closer to Wurzburg I befriended a German guy called Christian whilst cycling along. He was out cycling for the weekend from Frankfurt. We decided to stick together and he was kind enough to alter his route and follow me to Wurzburg. It was nice to have some company, although the pace was a lot slower than I'd normally do. Halfway through the day I had GPS issues (it wouldn't update!), possibly due to it getting cooked in the 30C heat. The GPS is ok now, but it's a constant worry. In some of the countries later in my trip where there isn't a cycle path to follow, I'll be lost without it.

I rested up in Wurzburg, a small city in Bavaria for 2 days. A quiet place, with a few things to do, but in all honestly I was just glad to do nothing, watch the F1 and sleep a lot. I did make a point of sampling the local wine, and trying quite a few beers. The best thing about beer drinking in Germany, is that there's always at least 3 beers on the menu that I've not seen before in each town, which means I have to try them.