Wurzburg marks the end of the Romantic Road, an old and no longer used medieval trade route running from the Alps near the south of Germany all the way up to Wurzburg. It's famous for passing through a number of medieval towns in northern Bavaria. I decided to change my route, and instead of going to Nuremberg, would cycle part of the Romantic Road (in reverse) and join the Danube closer to Munich at a small town called Donauwörth. 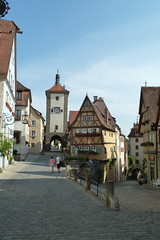 I hadn't been overly impressed by the Romantic Road, namely because of the hills and what I thought to be typical German scenery. This changed when I reached Rothenburg Ob Der Tauber, a walled medieval town that was like stepping back in time. My favourite town in Germany even if it was quite touristy. Japanese tourists seem to flock there, so much so that some road signs are in German and Japanese (but not English!), and there are often more Japanese people around than Germans. Unfortunately, part of the evening was spent in my tent due to thunderstorms and heavy rainfall, the first proper test for my tent. It rained for around 10 hours and very heavily. I woke at 0500 noticing my sleeping bag was becoming slightly damp from the condensation in the tent. Not an ideal situation given I have a down sleeping bag. The rain was hitting the tent so hard it was causing the condensation on the inside to drop on me. I wiped the inside of the tent down and went back to sleep. Apart from that one issue the tent worked a treat. 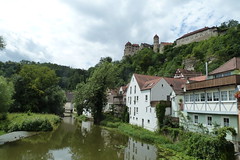 The next day I continued along the Romantic Road. There were quite a few hills, so I didn't particularly like the cycling but I did pass through a few more medieval towns such as Harburg, similar to, but not as good as Rothenburg. Towards the end of the day during a break I bumped into a traveller, Deitmar. He's currently walking a pilgrim route (Camino de Santiago) from central Germany to the north-west of Spain. Walking 35km a day with a 12kg rucksack is hugely impressive, especially compared to the daily mileage I'm doing... on a bicycle. We agreed to meet in Nordlingen and I pushed on ahead. I arrived at the hotel, did all of my usual chores (washing my bloody clothes), then sat out front sipping a few beers and waiting to see if Deitmar would turn up. Sure enough he did. We found a local pub and spent the evening drinking local beer, eating local food, speaking to the locals and talking about travels. By the end of the night he was even kind enough to pay for my meal as 'I was a guest of Germany'. A great day.

I eventually joined the river Danube, which will take me all the way to the Black Sea. Given it's quite a popular cycle route, I bumped into to a number of people going in the same direction, generally old people though but damn some of them can pedal fast. I ended up at a campsite and got talking to a German touring couple, and a younger skin-head German guy, who at first had me a little worried but in the end turned out to be harmless. 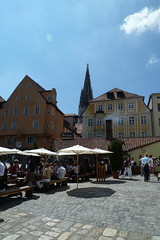 I followed the Danube to Regensberg, an old Roman town built by Marcus Aurelius and now a certified UNESCO site. I had one rest day there so walked around the small cobbled streets trying out all the beers and befriending random, noisy Americans. The town is largely a university town, one in eight is a student, so it had a similar feel to my university city, Exeter. Definitely worth a visit if you are in that neck of the woods. The Danube cycle path (Euro Velo 6 as it's formally known) after Regensburg was quite boring and for most of it I couldn't see the river. The only positive factor was the tailwind and the 30kmh average I was easily able to maintain for an hour or two. 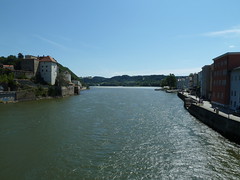 My last city in Germany, and right on the German/Austrian border was Passau, the city of three rivers (basically because three rivers pass through it). I saw my first bit of rain for the trip (after 3 weeks) so didn't see much of Passau as a lot of it closed up. I did warrant some time though as it's a nice little city, so I spent the following morning quickly looking around before heading off to Austria.

What I Learnt About Germany

It's better than France would be the first thing. There are a lot of Turkish people in Germany, and the doner kebabs are surprisingly good, so much so you can eat them sober and without lashings of chilli sauce. German's love food, beer, wine and ice cream, very similar to myself. Their food is a bit limited (please no more schnitzel) and "spicy" isn't something they understand, but they make up for it with large, almost American-sized portions. Every day I could drink a different beer I'd never heard of, so I did... and it never once gave me a hangover. Germany women are generally very attractive, if a little powerful looking at times. Germany is simply an awesome country.