Germany was such a great experience, I had high hopes for Austria given their similarities. The cycle path from Passau to Vienna is the most popular part so a great place to meet other cycle tourers. The Danube trail goes right through Vienna where I decided to take a long rest break and repair/replace broken and lost items. After Austria I entered Slovakia, staying at Bratislava before moving on to Hungary. 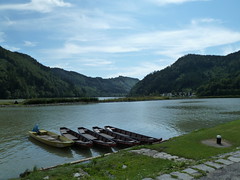 The trip across to Vienna was done over four days, all of which I camped out each night. Once away from the busy surrounding roads of Passau the cycle path was typically a small, well-tarmacked road but only inhabited by cyclists (and plenty of them, many of which were crazy/noisy Italians). For the most part it ran right alongside the Danube as it wound through a gorge. This created one of the best cycling days of the trip so far, and was probably the best route I've even been on. Relaxing, scenic, enjoyable and plenty of places to sit out and have a cold beer in the sun. During the first couple of days I met two German boys who were cycling from Munich to Belgrade during Summer break. I can't remember what I was doing at 16 but it certainly wasn't that adventurous! 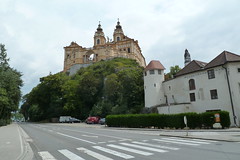 The third and fourth day towards Vienna couldn't quite compete with the first day, especially as by this point it had clouded over and was often raining. The third day from Grein to Krems did pass through some old medieval towns with "toll" castles, whereby each kingdom would charge river users a toll as they sailed down. These town seemed to largely be populated by coach loads of Americans, and the cobbled streets weren't appreciated when riding on the bike. 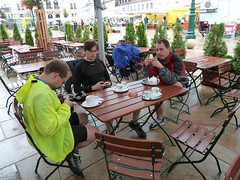 At the end of the third day I arrived at a virtually empty campsite except for myself and three Czech guys. They were very friendly and thankfully spoke very good English as I'm a little rusty with my Czech. They were; Martin, a programmer and from the sound of things quite a talented one; Tom, a contract designer, again sounding very good at what he does; and finally Radovan, "the best" (as he put it) or one of the best wedding photographers in the Czech Republic (but he doesn't travel far, so if you have a wedding it needs to be near his house). They introduced me to their home-made slivovice (49% alcohol) they were carrying around with them in re-used plastic bottles. I was told it would fix any stomach issues and keep me strong. Unfortunately after a long night of drinking, it had quite the opposite effect so my fourth day was a rather slow cycle in the pouring rain. I cycled with the Czech guys for the day, parting ways in Vienna. 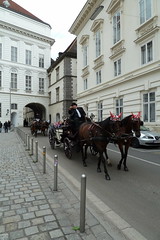 Arriving in large cities can often be a pain, but Vienna was surprisingly pleasant as the Danube runs through the heart of it with a cycle path on both sides. During my three night stay I was hugely impressed by the city. It oozes class and romance, with trendy bars and restaurants hidden down virtually every street. The architecture ranges from Roman to modern making a nice mix of old and new. Add in plenty of museum and opera and it's a very trendy, if a little expensive, place to live. It does have its more "earthy" areas, concrete playgrounds covered in graffiti, as I discovered when traipsing around the city trying to find a number of shops to aid in my repairs. My tent has developed a couple of pin-hole holes, so I needed silicon sealer. I had no literature beyond Budapest (ie where the route was, campsites, places to eat etc...) which was making me nervous, and I had lost my cycling glasses. Luckily I found everything I needed, even a guide book in English (my others are in German!) although I did feel a little like J.R. Hartley walking around all the book shops asking for a specific edition. And lastly some new cycling glasses. Unable to find any budget pairs in Vienna I opted for a pair of Oakley M-Frames costing me small fortune, but they should allow me to cycle faster (or so I tell myself). 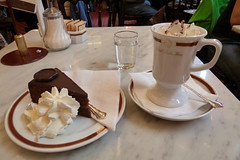 Having quite a sweet tooth, I couldn't pass up the opportunity of trying some Sachertorte in Vienna, a chocolate cake made famous by Franz Sacher in the 1800's. Many places sell variations (the original recipe is apparently a secret) but I opted to try the original at the Sacher Hotel. At £11 it's the most expensive hot chocolate (with rum) and cake I've bought to date, but it was worth it. I made sure I took my time and enjoyed being sat in a 5-star hotel's cafe. 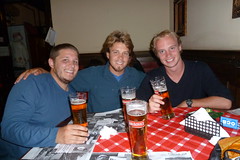 Vienna and Bratislava are the closest two capitals in the world. The cycle between the two was around 70km. It started off promisingly, but became rather boring with most places closed, so no lunch. Along the way I bumped into two American brothers; Daniel, a physical trainer and marathon runner (to keep in shape he ran every morning for an hour before cycling!); and Matt who had just graduated with a masters in history. They were over from Long Beach, California cycling Passau to Budapest. A relative had passed away and one of his dying wishes was that they cycle part of the Danube. So they jumped on to a flight to Munich, bought some bikes there then made their way over to Passau. They may not be doing as much distance as me, but it's still a long way to come and very adventurous thing to do. We joined forces and would be my cycling partners for the next three days. It was great to have the company and some intelligent conversation as cycling through Slovakia was quite boring. I arrived in Bratislava. A mixture of old, new and buildings that represented poorer times. It wasn't the prettiest city, but the people were very friendly and most could speak fairly good English. I don't think it'll be somewhere I'll revisit though.