My first impression of Hungary was fairly poor. Since Vienna it had been, grey, cloudy with constant showers. This continued in the north of Hungary and into Budapest. The roads were for the most part quite awful, covered with potholes or littered with sand which got all over my chain and gears. In the wet the roads only became harder to cycle on as puddles masked potholes and bumps. My time on the bike was largely spent focussing on the road below me, rather than the scenery around me. When I was able to focus on the scenery it was typically boring and often industrial. On one occasion the Euro Velo 6 took me down a track completely flooded and covered in potholes. No cars were using it, yet I was expected to be able to do this on a touring bike fully loaded when it was something I'd normally take my mountain bike down!

The Road To Budapest 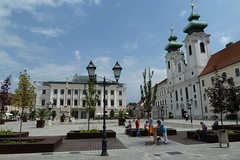 I was still cycling with Daniel and Matt, the American brothers from California. On the way to Budapest we passed through the town of Gyor. It was the one saving grace for the north of Hungary. A beautiful little town with a distinct Mediterranean feel and fascinating fountain display. The clouds dispersed and the sun appeared so we sat out in the square and ate lunch. Their schedule got them to Budapest on the Saturday, whereas I had booked my hostel from the Friday. So I eventually split from the group and pushed on ahead to make up the distance to get me in to Budapest a day earlier. 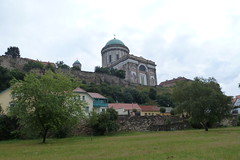 A day later I arrived in the town Esztergom along the Danube, a previous capital for Hungary. It was a fairly nice town, but the main attraction was the huge basilica built up on a hill overlooking the town. Having got soaked during 4 hours worth of cycling I decided to check myself into a hotel and get cleaned up. The last four days had been quite hard and I was beginning to feel the wear of cycling almost every day. There was a temptation to quit (or cheat), but it's too much thought and effort, so I just continue cycling each day as it has become all I know. Hungary has been one of my least favourite countries, and left me caring little for Serbia, Romania and Bulgaria which will be in next. The one motivation I have is the sea, namely the Bulgarian coast. Sun, sand, sea and lazy days are quite the motivator. So I push on. 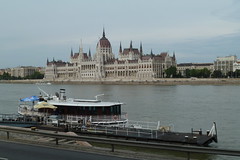 I arrived in Budapest almost a month after having started for three rest days. I immediately liked the city and found it very similar to London when cycling on the roads through the centre. My first night was spent on a pub crawl around all the ruin bars. Once abandoned buildings, many got bought up and filled with random second-hand furniture and turned into bars. It's like nothing in London and was probably one of my favourite parts of Budapest. The beer is fairly cheap and countless hours can be spent exploring all the ruin bars enjoying the night life.

The next day I did a free tour which was by far the best I've done so far on my tour. I broke away early though to go and visit one of the spa's. It cost 3600H (around £12) and I soaked there for 3 hours. It wasn't what I expected though. Maybe I had high expectations but something more Roman-like, without kids, with steam everywhere and people handing out white towels was the image in my head. In reality it's typically a large public swimming pool with lots of smaller indoor pools, sauna's and steam rooms around it. Nothing exceptionally impressive but a nice thing to have in a city. I did have fun though, sitting inside an 85C sauna was the highlight that left me feeling light headed. 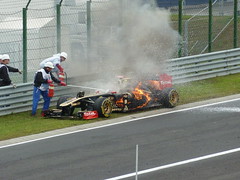 While in Bratislava I had noticed the Hungarian F1 would be on the weekend I was set to be in Budapest. So I bought a grandstand ticket setting me back €280 (it was one of the best seats, I spared no expense). So on the Sunday I set off to the Hungaroring circuit taking a combination of the tube (320H single) and train (1100H return), but mainly following the hordes of Ferrari fans when I got lost. There was a rather long 2-32km walk after the train and then a long queue (it was faster to buy a ticket than pick up a pre-bought one) to pick up my pre-ordered ticket which put me in a bit of a panic. Apart from that it was a fantastic day, and the annoying showers I'd been experiencing made the race one of the most thrilling of the season so far. I'll definitely be going to more F1 races from now on.

On going to the F1 there was a slightly odd/scary moment on the underground when a man with a backpack stood up and shouted at the top of his voice a phrase in Hungarian three times over. At the next stop virtually everyone got off the carriage (to wait for the next train), but as I was slightly late for the F1 I stayed on. It was a nerve-racking few stops, but in the end nothing came of it.

During my final day in Budapest I went caving on the Buda side. It cost around 5000H and lasted for 2 hours. It started off ok, but nothing too challenging. I had read online about a part called the "sandwich" so we begged the guides (two girls) to take us through it. In the end they did and it turned a fairly average caving experience into an excellent one. The sandwich was a very narrow crack in the caves lasting around 10 metres, slanted at 45 degrees and went upwards. You had to make footholds with your hands to help the person infront as it was slippery due to the rain. At one point I couldn't turn my head, and it was so narrow that a deep breathe (lying on my chest) in would make my back and chest touch the rock on either side of me. Proper caving, and I loved it. I also got to use my orange (no longer orange) vibram five-finger shoes!

Sadly, Budapest was slightly tainted upon leaving as I had my Dahone dynamo battery stolen. This limited my camping options as I could no longer charge my devices, namely my GPS on the go, or at the end of the day. What I do now is actually use my laptop as a battery and charge my things at the end of the day. It's not quite as convenient, but it allows me to still camp for two or three days in a row. The main annoyance is that I have the resistance of the dynamo on my bike, generating electricity, but with no where to store it! Added effort without any outcome. It left a sour taste in the mouth and dropped my spirits during the 100km cycle out of Budapest which was pretty awful (busy roads) as it was. 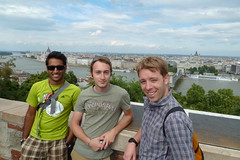 I did like Budapest, but mainly because of the F1 (which I could have done in any country), the caving (again I could go pot-holing elsewhere) and the bars/night-life (granted they were unique experience). Everything else I found to be hyped up. The spa's were nice, but not as great as I had expected, and the city itself from all the stories I've heard I find to be a little over-hyped. It's still a lovely city, but not as amazing as many people had told me (maybe because they thought I'd never go). For me, it can't compare to Barcelona, Berlin, or Madrid. 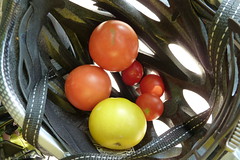 Once I was 50km south of Budapest, Hungary started to become the country I had expected and nothing like the north. The countryside was very scenic and I passed through many small villages along the way. I stopped in Kolosca for lunch, one of my favourite towns and one of the first to be beautifully kept. Upon stopping in the shade to check my map in a small village, and old woman came out and gave me a dozen home-grown tomatoes to eat! It felt like a different country at times. My final night in Hungary was spent in Baja in a hotel overlooking the huge cobble stone square. I definitely preferred the south of Hungary, although in truth I'll probably not return as there are other places I would like to see, and places I've seen but prefer.