Entering Croatia, psychologically, felt great. I had been 8 years before and really liked the country and people so was happy to be back. As I entered a huge thunderstorm ran along side my towards Hungary with flashes of lightning and cracks of thunder. I smiled to myself, glad I was out of Hungary. I sped on, averaging over 30kmh as the thunderstorm a bit too close for comfort. It was quite exciting being so close yet not actually in it (like I'm used to). I was so close that when the wind changed direction I could feel spots of rain. This continued for around 20km until it started to change direction! 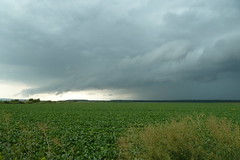 I kept up my pace but it eventually caught me. I took cover under a tree, but the rain was so hard it came through the leaves and I was soaked within 20 minutes. The lightning and thunder were directly above me, so close the thunder made me jump a few times. It was one of the biggest thunderstorms I can remember being in. I eventually got cycling again, but slowly as the roads often had streams of water running down them, most of which ended up in my shoes. I didn't mind though and eventually cycled out of the thunderstorm. I later stopped to squeeze all of the water out of my gloves, clothes and socks.

A couple of weeks ago I had placed an order for some Oakley's via their website. The prices were so low I bought two pairs, one casual pair for myself, and some M frames for my brother's birthday (as I've been so impressed by the ones I bought in Vienna). The cheap prices turned out to be a mis-price though, and Oakley cancelled the order. Amazingly though Oakley did a u-turn and reinstated the orders, but for completely free! Quite an amazing gesture. Knowing I'm getting £400 worth of glasses for free killed off the memory of the thefts in Hungary, and kept me warm during the thunderstorm. 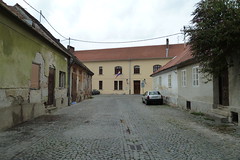 My first stop was a small town that on numerous occasions has all but been destroyed (and re-built). The old town was nice enough and interesting to walk around although it didn't really grab me. To make matters worse my hostel (Hostel Tufna) was the floor above a night club. Even with earplugs in the booming bass could easily be heard and went on until 4am. I was also in a "5 bed room", yet it had 10 beds. And in general it was quite dirty. Not a pleasant experience. 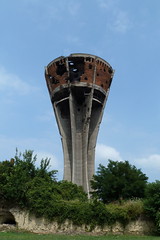 The next day I cycled towards the Croatia/Serbia border to a town called Ilok. Despite only being around 85km the day had a few challenges. Constant 8% hills, which aren't too steep by English standards, but in the 30C heat of the day and doing around 8 of them, so I started to tire. Also every hill was "8%" despite varying in gradient. I think Croatia either made too many 8% signs and wanted to use them up, or only has one sign in production. The Euro Velo 6 route throughout Croatia is mostly roads (95% of the time) but I found them quite bearable. They're smooth which was quite a blessing after Hungary, so I could maintain a fast, constant speed. And the the traffic wasn't as bad as I thought it would be (much like going along a b-road in England). Once in Ilok I gave up trying to find a guest-house and booked myself into the Hotel Duna, a 3 star hotel right on the river. It was a nice slice of luxury although cost me £37 for the night. Tomorrow I cross into Serbia!