Entering Serbia was easy, and took only a couple of minutes at the border control. At first I was surrounded by farms, and relatively poor villages but as I got closer to Novi Sad the surroundings slowly became wealthier and roads busier. I had left at 1100 and arrived by 1400 so had cycled in the heat of the day... around 32C. It wasn't very pleasant, especially as there were hills. I told myself I wouldn't do it again (how little I knew!). 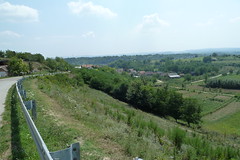 Arriving in Novi Sad, I bumped into two English guys (fresh out of university), ("Safety") Mark and Ed, that I had bumped into briefly in Vienna. Unfortunately they were leaving Vienna as I arrived, so I had thought it was company lost. As fortune would have it they had taken a couple of extra days rest around Budapest so I managed to catch them. They were cycling a very similar route, although started on the Rhein in Holland and were going to Constanta in Romania, whereas I would eventually head South into Bulgaria and then Turkey. It was still a chance to cycle with some company so I joined forces with them.

My one night in Novi Sad was spent enjoying the town, going out to bars, clubs and staring in amazement at how beautiful the majority of the women are. We walked up to the [wiki]Petrovaradin Fortress[/wiki] on the other side of the river. It dates back as far as Roman times but was since been rebuilt and modified and now is full of bars, clubs and restaurants all done in a way that doesn't ruin or retract from the fortress itself. It is also home of the Exit festival. A great place to visit and very lively, highly recommended if you're in the area. 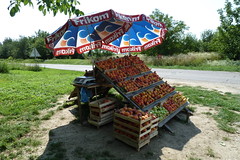 The next day we left Novi Sad to cycle to Belgrade. Having stayed out until after 0300, we didn't start cycling until 1330. This meant once again cycling through the heat of the day, which this time was 34C. After about 10km we hit a hill (an 8% one!) that lasted around 6km. This took us around 30-40 minutes to climb but in the process we were drenched in sweat and quite exhausted from the heat. I could have jumped in a swimming pool and not have been much wetter. Once over the hill though we had a 6km descent which was quite a relief. We didn't have time for lunch as we had set off so late, so the day was spent buying fruit from the fruit stalls that line the roads, cans of coke and ice creams. Serbia grows the most awesome peaches (watermelons I preferred in Romania). In the end it was a fairly pleasant day. We arrived at Belgrade by 2000 just as it was getting dark. Tomorrow would be 36C(!) but thankfully it was a rest day! 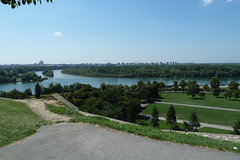 Given the 36C heat it was hard to do much on our rest day in Belgrade. We did walk to the fortress up on the hill which had great views across the city looking down onto the river. But most of our time was spent jumping to and from shaded areas, or sat drinking ice-cold drinks under a parasol. Belgrade had a nice feel to it and a huge bar (more so than club) culture. Trendy bars line some of the back streets and both banks of the river (a tributary of the Danube) that cuts through Belgrade. Drinks were fairly cheap at around £1.50 a pint. Unfortunately our rest day was a Monday, so it wasn't the best night of the week to go out, but there was still a good vibe until midnight. The main high street is pedestrianised and worth a visit. It has a similar feel to something like the Ramblas in Barcelona, packed full of people, families, entertainers and lined with cafe's and restaurants, with people walking up and down it even during weekdays until near midnight. 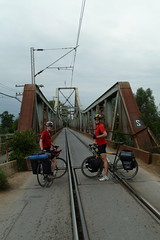 The roads into Belgrade had been fairly pleasant. It was quite the opposite for leaving. The first 20km was spent in heavy traffic, which was bearable when the road was dual carriageway (as the traffic uses the other lane to overtake you), but became much harder when it was single lane as lorries, buses and cars would all squeeze by. Things didn't get much better after leaving Belgrade. We experienced our first dog attack. Cycling near a factory, six dogs bolted across a grass verge, over a ditch and into the road barking at us. They were fairly aggresive and at first just barked at us as we went by at 20kmh, but eventually one made a move, biting into my right pannier. I carried on pedalling and dragged it along a bit before it let go. After that experience we armed ourselves with sticks, stones and mace to fend off any future threats.

One common feature of Serbia is the amount of road-kill at the side of the roads. Mostly dogs, we have seen around ten since entering Serbia, some flattened like pancakes as if it were something from a cartoon. Today however was different as we saw our first human body at the side of the road. Unsure of what we had just seen, we circled back and passed by a woman lying in the ditch at the side of the road. A car saw us doing so, and also noticed the body. We stopped a little further on unsure what to do, but by this time the car made a u-turn and headed back to inform someone so we decided to just keep going given it was being delt with. We don't think she was dead, probably homeless and drunk, but couldn't be sure. The road was in a fairly remote area and a random place to see a body so the whole experience was a bit odd/haunting. We decided not to get a photo.

Our final stop before entering the Danube gorge was Pozeravac, a small town that left us feeling we were in no-man's land. The hostel was good though at €9 we basically had an apartment to ourselves, with kitchen, fridge, sofa, dinner table and ensuite. The town did actually have quite a bit of night life but by midnight we decided to head back to get plenty of sleep for the gorge the next day.

The next two days that followed were the best cycling of the trip so far. We were now deep into the Serbian countryside, passing through a mixture of either very poor or quite wealthy areas. We got the most "hello's" and attention in the poorer parts, usually from kids just wanting some attention. While not great cycling due to the bumpy roads, it was fascinating travelling. At one point, upon stopping to check the map, we were invited to share watermelon at a house. We sat in a garden eating our way through a couple of watermelons chatting to Milan, an out of work graduate with a degree in computing. As we were told on numerous occassions no one has a job in Serbia, so they just party. While this was partly true it was clear to see Milan was frustrated being an educated man, but unable to find work. 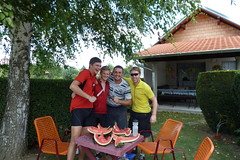 For the past few days we had been quite a distance from the Danube. We eventually rejoined it and the route from Ram all the way to Sip (where we crossed to Romania) was the best cycling of the trip so far (topping Passau to Vienna). Around 100km of cycling through a gorge on a road, which sometimes had fast traffic, but for the most part was fast, smooth and relatively empty. Every time we saw something amazing we'd start imitating the Double Rainbow (hilarious clip on Youtube) by getting over excited.. There were a number of tunnels (that aren't lit) which while a little dangerous were really exciting and I'm glad we went through (rather than being on the tunnel-less Romanian side). The longest was around 300m which seemed to last ages but my IQ Cyo dynamo light ensured I could see everything in front of me. On the downhills we all managed over 65kmh which was the fastest yet for all of us. Definitely somewhere I would cycle again. 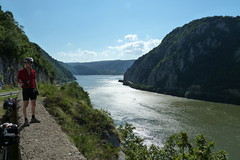 Eventually we arrived at Sip to cross the border into Romania. Serbia had been a great experience. The people were very friendly and we constantly got honks of encouragement from passing cars. The women are very beautiful and fairly fascinated by western Europeans given how closed a country Serbia has been in the past. At no point did we feel threatened or in danger, the dogs were the biggest threat, but more of a nuisance than a danger. It had been a great experience and one I will hopefully relive again.