Having met Ed and Mark in Serbia and cycled with them for nearly a week, I decided to change my plans. The original plan, I would cross into Bulgaria at Ruse, cycle one day to Varna, a second down the Bulgarian coast, and a third day cycling to Kirklareli in Turkey where I would take a bus into Istanbul (the roads are awful going into the city, so best to avoid them). Instead I decided to cycle an extra day to Constanta and from there either take a bus direct to Istanbul, or stop off along the Bulgarian coast for some more cycling (probably the former!). It meant doing around 150km less but I didn't mind. 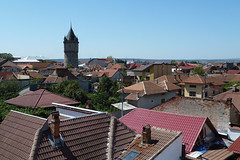 Crossing the border into Romania was quite a contrast from the gorge road in Serbia (probably the best road of the trip). We were thrown onto a highway with no road markings and trucks constantly whizzing by us at great speed. Our first stop was a small town called Drobeta Turnu Severin. An unfriendly feeling town with very little to it. We managed to find a hotel (Hotel Europa) for €40 (after arguing with the guy on the desk) between the three of us got some much needed rest. 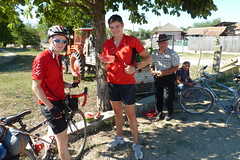 The next day (and consequent days) were spent riding along bumpy roads, dodging pot holes, and giving waves/"hello's"/hi-fives to locals in the villages we passed through. So much so it actually became quite tiring. At a guess I must have given out a few hundred shouts of "hello's" and waves, and over a hundred hi-fives. Also the kids have far tougher skin (more like leather) than my fairy liquid soft skin, and wrists like steel (from working in the fields?) so giving ten hi-fives in a row can leave the hand a little sore. 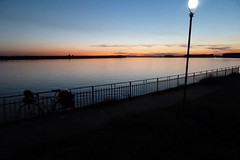 Romanians don't seem to be great at guessing where people are from. Shouts of "hola", "guten tag", "bonjourno" or despite speaking with them in English, being asked if we are German! Excluding the larger towns, the people in the villages have been the most friendly across Europe, especially the farmers. On numerous occasions we'd stop to get a watermelon, or peaches, or tomatoes and they end up giving them to us for free despite us insisting on paying. At one point they were asking us to stop cycling to off-load free watermelons on to us! They were the best watermelons I've ever had and I've never seen so many truck (well horse drawn carts) loads. It is watermelon heaven.

Laid Back Or Disorganised 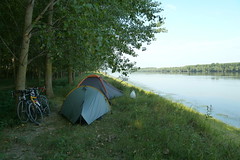 At the end of our first full day of cycling in Romania we pulled up into Cetate, a small village north of Calafat. We approached a hotel and two restaurants in search of a meal, but none of them could be bothered to cook us a meal despite the chance to earn some money. Eventually we just went to a supermarket. Next stop was our "campsite" which didn't know if it was a campsite or not, but on the offer of money told us to camp about two meters from the driveway! They made us a meal too although I think it was leftovers as it was all cold. And finally they tried to extort €40 from us for it all, but we refused and paid the originally agreed €20 (between the three of us). This wasn't contained to one night and seemed to be a theme across most of Romania.

Before leaving the campsite the next morning a Romanian tv crew approached us. As we were packing up our tents a car turned up with a presenter, camera-man, co-presenter and photographer. They asked if they could interview and film us cycling so we obliged. I've not yet got to watch the videos, although they are meant to be on Youtube. The interview did mean a 1230 start though so the day ahead was again a hard slog.

Our second day was just as difficult as the first. The temperature was still up in the 30's and given our late starts we were cycling through the heat of the day. The scenery was relatively flat and boring, and the towns/villages felt almost identical. Romania so far was not the most enjoyable country in terms of countryside or roads, but what really stood out were the people.

Not A Place For Horse/Dog Lovers

Romania does have plenty of horses and they are an integral part of the society. As we cycled along we would constantly pass horse draw carts. We witnessed horses where the rib cages were far too visible, being whipped quite hard. One horse had to go down a steep hill that even we would have found tricky, maintaining speed so as not to get run over by the cart it was pulling. To make matters worse during this four dogs charged out barking/attacking it causing the horse to swerve quite violently. I just wish I could have caught it on camera. There are plenty of stray dogs wondering around, especially in the towns and they often bark or chase bicycles/horses.

We didn't find the dogs in Romania as aggressive as we had read, possibly due to the heat most of them would just lie around, or give the occasional bark but no chase. If any did come at us, maintaining speed and giving them a loud bark made them back off. In most cases they're just blowing hot air, so not making eye contact, and creating a lot of noise (barking back) deals with the situation. You just end up looking a bit odd barking as you cycle along. Many dead dogs line the roads, giving off quite an unpleasant smell and one that I can now easily identify (and wish I couldn't).

After 4 days of cycling in Romania we finally arrived at Guirgui, a fairly large town on the Danube. It wasn't a particularly nice town. Having cycled 120km, we sat down to recover and enjoy some coffee and milkshakes. At around 1830 we went in search of the campsite our guidebook had marked on the map, only to find out it didn't exist! As it was getting dark we started looking for a hotel as an alternative. Hotel Sud was sign posted around the town so we began the one hour search for it, following the confusing signs (which kept telling us to make u-turns), asking locals who gave out wrong directions, and using the GPS. Eventually we found it, having cycled through numerous housing estates with dogs barking, and kids firing ball bearing (bb) guns at us. After a long negotiation at €45 for a single room and €60 for a double the prices were extortionate and a bit of a joke given how awful the town was. We decided to cut our loses (given the town only had two hotels) and head to Ruse in Bulgaria on the other side of the Danube. By now it was dark so we had to night cycle the additional 10km across the busy border crossing and arriving at Ruse by 2130. It was some of the worst cycling of the whole trip. However, Ruse was such a stark contrast to Guirgui, a quite beautiful and pleasant town. After the night cycle experience (taking our daily mileage to 138km) we decided to take a rest day there.