Having left Romania for Bulgaria, we spent a rest day in Ruse. The contrast between the Romanian town, Guirgui, and Bulgarian town, Ruse, is huge despite them being a bridge apart. Ruse had a beautiful town centre filled with water fountains, a town hall, opera, and plenty of cafe's and bars to sit outside in the evening. The first part of our rest day was spent lying in bed. Once up we found Planet Food, a coffee shop near the centre and bought the equivalent of two meals per person (it got a look of shock from the waitress). 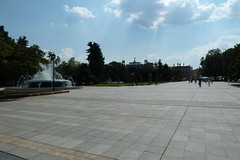 Given the 35C heat we didn't last very long walking around in the middle of the day. Instead we retreated back to our air-conditioned hotel (€39 between the three of us per night) and watched some South Park. Once it had started to cool down we went back out to eat and drink at the huge number of cafe's that line the pedestrianised high street. Bulgaria felt a lot nicer compared to it's equivalent on the other side of the river, the only difficultly was the Cyrillic characters making it a nightmare to read menu's (in kebab shops!). Unfortunately, being a Tuesday the night-life didn't extend very far, so we had a few beers and went to bed just after midnight. 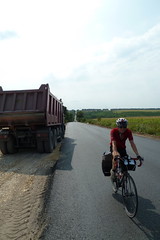 The next day we set off at our earliest time yet (as a group), 1000. The roads out of Ruse weren't very pleasant as we had to pass the bridge (ie border crossing), so had plenty of lorries whizzing passed us along a dual carriageway. Once about 50km away from Ruse the countryside became more interesting (but also more hilly) and roads more bearable. In terms of metres climbed in a day it was one of the most for the whole stage, and the constant up and down (few flats) became frustrating. It wasn't the best touring route, but in terms of pure speed and road cycling it was very good. Before we knew it we had reached Silistra (another nice looking Bulgarian town, although not as nice as Ruse) and were at the border crossing ready to re-enter Romania.

Entering Romania the second time was a lot better. The road from Silistra lead directly to the coast so the surrounding area was a lot more affluent. We encountered our first hills in Romania through vineyards and the typical villages we had passed through on our first entry. 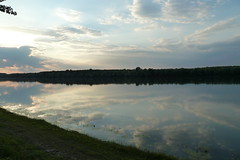 We wild camped near the Danube close to the last point we'd see it. The Danube turns north whereas we continued east to Constanta. It's fairly easy to find wild camping spots in Romania. Our spot was perfect, a matter of 5 metres from the Danube, although we were engulfed by dozens or mosquitoes trying to get through the insect mesh on our tents. Mark despite his thin frame was the juiciest to the mosquitoes and come the morning he'd usually wake up with a constellation of bites across his back. Amazingly, given this was the most mosquitoes we'd seen, he ended up with only the odd bite.

The last day was unfortunately not very pleasant. At 120km it was fairly long in the 34C heat. We encountered around 5km of cobbled streets through villages. The final 30km of the trip was spent sharing the road with large lorries taking materials to construction sites, and then finally a 6 lane highway into Constanta. It was a real grind and I was glad to have the company of Mark and Ed.

Over the past two weeks, under the influence of Mark and Ed we've all become addicted to Coca Cola. Every cycle stop is followed by a can of coke, and a (soggy) cornetto. At the moment given we may stop two or three times, I'm going through around a litre of coke a day. Not the healthiest thing to drink, or particularly good for my teeth but it's so readily available, in a few cases more so than bottled water! 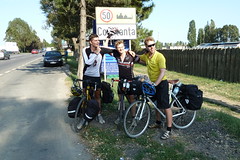 Reaching Constanta was a bit of an anti-climax. It's is not the picturesque town on the sea I had envisaged. On our first full day at the beach we were already talking about how we wished we had gone to the Mediterranean Sea instead of the Black Sea (a poor man's Med, which did fit as we were in Romania). The beaches are nice but nothing special, usually covered in sand with broken shells and rubbish/cigarette butts all over the place. A descent amount of topless bathing though which was encouraging to see. Constanta has some good bars in the old town and restaurants where £12 will get you a first class, large meal. A beer usually costs around £1.50 a pint (not quite as cheap as the £0.75 a pint we were used to in the villages). There is also Mamaia (a few kilometres north of the old town) where most of the hotels and clubs reside (and a water park which was good fun!) and prices double or even triple. The clubs were quite amazing and glamorous to look at, where virtually every girl was stunning. There was a distinct lack of character though and they were surprisingly boring. A case of image over substance, people would just stand around and look "cool". At one point our group was escorted from the dance floor for having too much fun (seriously) and told to stand elsewhere. My last night with Ed and Mark (and some American soldiers from Regensburg) was spent in a strip club. We were rinsed £180 each although that did buy us nearly three hours of quite unforgettable and slightly bizarre memories, Ed and I getting stripped completely naked on the public stage (to the laughter of the other guys) with girls dancing around us being the most prominent. It was an expensive but funny goodbye to my two companions for the past two weeks. Ed goes on to flight school while Mark is off to do a season in Whistler (lucky git). My next stop would be Istanbul.