Given my change of route by going further east, rather than south-east, and due to time constraints from buying a super-cheap flight to Tokyo, I took a bus from Constanta to Istanbul (costing me €22 and taking around 12 hours). Sadly this meant that my only stop in Turkey was Istanbul, but on the positive side it meant I didn't have to deal with the chaotic roads into Istanbul. The bus I took was awkwardly timed, leaving Constanta at 1500, but arriving 12 hours later in Istanbul at 0300. I wasn't able to sleep on it much so by the time I reached Istanbul I was feeling quite shattered and left to wander around in the dark. 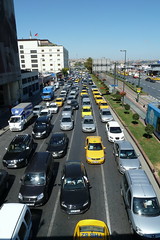 Luckily I arrived at a closer bus station than the international bus station (Buyuk Otogar) I had expected. This brought me 7km closer to my hostel. Arriving at 0300 wasn't very helpful though, luckily I had company. Ze German girls we (Ed, Mark and I) had met when cycling the Danube through Romania were also on the bus. We loaded up our bicycles and started cycling through Istanbul in search of a coffee shop. It was quite eery cycling through at such an hour with prayers echoing across the capital and market stalls preparing for the day ahead. Eventually we found a coffee shop and spent the next 5 hours (!) there drinking coffee and eating pastries. I eventually left the girls around 0900 to go and find my hostel. Negotiating my way through the rush-hour traffic was a nightmare given how fast and impatiently everyone drives. Far worse than London or parts of China. I got to my hostel by 1000 but had to sit around (nearly falling asleep... doing the nodding dog) until 1400 when I could check in. I stayed at the Bada Bing hostel in the southern part of the [wiki]Beyoglu[/wiki] district. An excellent hostel at around €12 a night, bicycle friendly too. The rest of my first day in Istanbul was spent sleeping and later eating in the evening. 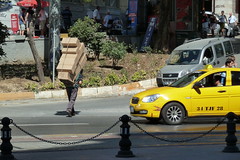 I decided to get the bike boxed and ready for the flight done and out of the way as soon as possible. The first part of the day was spent going from bike shop to bike shop asking if they had a box, or in most cases miming it out with my hands. After about the 5th shop I finally found a shop with plenty of boxes and bought one for 10TL (I should have haggled for 5TL). It was located in [wiki]Sultanahmet[/wiki], in this area.

Next I had to find a hardware store to buy bubble wrap, pipe insulation (to put around and protect the bike frame), duck tape, and cable ties. After walking around for an hour, I found a small shop (on Galip Dede Cd) where the owner didn't speak a word of English. Cue my miming and drawing skills. Bubble wrap was an easy mime, everyone loves a popping a bit of bubble wrap. I don't think I'd have a problem anywhere in the world getting bubble wrap. Cable ties required a drawing, and I saw duck tape on the way in. Pipe insulation was beyond me though. 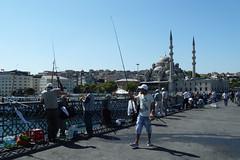 Even with a Turkish guy that could speak English they didn't understand why I wanted pipe insulation for my bicycle. I kept getting told it's for houses and in the end was offered the wrong thing anyway, polystyrene, which turned out to be quite handy for packing around parts of the bike.

I spent the afternoon packing the bike into the box. For my first attempt I did quite well, although decided I would re-pack it in a day or two. Despite doing quite a good job, it was an annoying thing to do, and something I'll have to do another 4 or 5 times before I get home to London. I have no idea how I'll get it done in China or India. 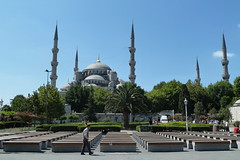 A touristy day spent walking around all of the main sites of Sultanahmet. While amazing to see many of them, I preferred Beyoglu and Bisklet in the "new Europe" part of Istanbul. Walking through Sultanahmet, the streets were packed with a mixture of tourists and locals, but in general there seemed to be far more tourists. Once up by the palace you reach a strip full of coaches (dozens) that ship in hordes of tourists and take them on tours around the Topkapi Palace, Aya Sophia and Blue Mosque.

I lasted around half an hour at the palace before I had to get out due to the sheer number of tourists. The Aya Sophia was no better, with a large queue outside, building works (paving) going on around it and a 20TL entrance fee. As it's now a museum no dress code is required, but this detracts from the spiritual/religious aspects of it and spoilt what is an important and historic church come mosque.

The Blue Mosque was a far better experience. Nowhere near as busy as the other two attractions and still in use, it had a a great spiritual presence. I didn't venture inside as I was wearing shorts, but walking around it outside was still a fascinating experience. 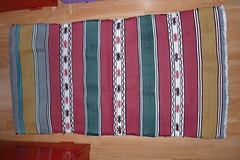 Enter a Turkish carpet sales man (as I stand looking at the Blue Mosque). At first he and his companion just chatted with me, but then persuaded me to come and see some carpets they had in their car. Curious, I walked with them through a number of back-streets until we arrived at the car. He had around 15 carpets in the boot, and started trying to sell me one. I had initially, told him I had very little money, so played on that the whole way through. The starting prices were £120 which was (in my opinion) ridiculous. I came back with £20 which was met with shock and laughter. I stuck to my guns though and wouldn't budge up much. In the end the final price was £33. He wasn't as friendly as when I'd first met him so I knew the price was fairly good, although I reckon £28 would have been perfect. Given I'm cycling I wasn't really looking for a carpet, so it was nice to be able to have a "I don't care, take it or leave it" attitude. The carpet isn't hugely traditional (I think) by any means, nor will it be of the highest quality, but for me it's a nice carpet and £33 was a reasonable price. Later in the evening I met up with "ze Germans" for dinner and ended up by Tophane Kasri which is lined with water-pipe cafe's and bars. We spent a couple of hours smoking apple and cherry mu'assel (shisha to westerners), and trying different teas, my favourite being [wiki]Salep[/wiki], a thick, spiced tea with cinnamon and lots of milk. Although on speaking to other Turkish people (at the hostel) I was told it's a drink for winter and not 30C August! I didn't care, it was tasty.

Today I decided to re-box the bike, which I did a lot better this time round and am now fairly happy with (given it has to survive three flights and being lugged across Japan). I also had my first Turkish haircut, although decided to shave my face myself (I always shave my own face after a bad experience in China). The haircut was the first place I hadn't haggled over the price. Until then, at every shop, be it for an ice-cream, food, clothing etc... I would always ask for a cheaper price and in most cases get it. The haircut cost me 20TL which is similar to London prices for a barber. To make matters worse it wasn't quite what I asked for. I specifically asked him to use grade 4 on the clippers, but on the initial shave into my hair could see it was much shorter. Given I couldn't really do anything I let him do his work, and am now sporting a nice army cut closer to a grade 2. If I had known the outcome I would have bought some clippers in the market and done it myself. The evening was spent crawling from bar to bar in Buyoglu and Bisklet. There are some great roof top bars. One we found was actually a hotel where a beers costs £5, but despite this you are up on the 19th floor looking over to Sultanamet. It was well worth it for the view. 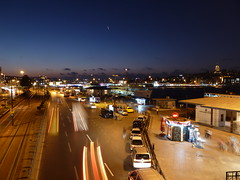 My final full day in Istanbul was spent catching up on writing blog posts, processing photos and eating plenty of food. I did venture to the Grand Bazaar and Spice Market, but was largely disappointed by them. Full of Manchester United scarves, and tourist rubbish, there was nothing of interest in the Grand Bazaar for me. The Spice Market was a little better but compared little to some of the markets I had visited in Morocco. To treat myself I had (yet another) Turkish ice-cream. I don't know what they do to the ice-cream, but it's almost chewy in texture and very addictive. It's certainly comparable to Italian ice-cream, if not better in my opinion. It doesn't come cheap though, the street sellers will often charge around 5TL for the pleasure.

While I was glad to move on (or excited to see Japan), I did really enjoy the east-meets-west fusion of Istanbul. It's a crazy place where they seem to grill just about everything (tomatoes, carrot (!), any meat, you name it), and prayers can be heard echoing across the city throughout the day. I do miss their use of quick repetition, "taxi, taxi, taxi", or the "Bosphoro, Bosphoro, Bosphoro, Bosphoro" guy that tried to get me on his boat tour every day I walked passed. To be honest the repetition does work, if I was going to take a boat trip, it would have been his. It's just a shame I didn't stay a few days later as I would have witnessed [wiki]Eid ul-Fitr[/wiki], a celebration that marks the end of [wiki]Ramadan[/wiki]. As a double blow, staying later would have meant being in Japan later, and being around for the September Sumo tournament in Tokyo. Just shows that spontaneity doesn't always work out. I did at least get a £390 flight to Tokyo which is very cheap, but I'd have paid the extra to see some big guys in nappies push each other about while getting drunk on sake.