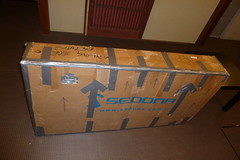 Update 13/01/2012 - I have since found it much easier to fly with the bicycle un-boxed. Here is a list of the flights I have taken. Boxing the bicycle in Istanbul for the flight to Tokyo wasn't terribly difficult, but it was a pain. The total cost was around 30TL (around £10). The biggest pain was getting around with the bicycle once it's in the box, especially when also having to carry 16kg worth of luggage. From my hostel in Istanbul I took a large taxi (as the bicycle box won't fit inside a standard taxi) costing me 65TL (£25, ouch). I had been told I would be able to fit in a standard taxi, which would have cost half the price, but upon it turning up it was obvious I couldn't. With little time before the flight I had to order a large taxi. The alternative would have been to take the tram (which would have cost around 5TL), but given how busy Istanbul is, I decided against this.

Arriving at the Ataturk airport you have to pass through scanning machines even just to enter the airport. Everybody enjoyed me filling up the queue with my 1.5m bicycle box. I got to the Etihad Airlines desk where I began to check-in. They opened the bicycle box at the desk, and then said they would take care of it from there. This left me a little nervous (would it make it on the flight!? would they tape it back up properly?) but there was nothing I could do. They weighed the bike but I was still able to check in another 8.5kg without any problems. This would have taken my check-in weight to around 23-25kg, my allowance being 23kg. Phew.

I did get caught out on my hand luggage though, which weighed 9.6kg when I'm only allowed 7kg. I told the check-in assistant I would re-arrange my bags. I merely opened my carry-on luggage, shuffled it a bit, then sealed it back up, weighing no less than it had before. He never asked about it again, and I was able to take it on the flight, nervously but without any problems.

I arrived at Tokyo and was brought my bike-in-a-box on a trolley by a little Japanese girl. Despite having been through 15 hours of flight, and a change-over the bicycle was fine. One of the carry-holds had torn open a bit so in Tokyo I sealed and strengthened that as best as possible.

Getting around Tokyo with the bicycle box wasn't a problem. I took the metro, JR Rail and Shinkansen (bullet train) without being stopped by guards or personnel. The hardest part of carrying everything was the heat and humidity. It was still 30C every day and very humid, so after a few hundred metres I would be drenched in sweat, and by a kilometre or two exhausted. The straps on my Ortleib Back Rollers have even started to bruise and cut my shoulders. While great attached to a bicycle they don't suit being carried over your shoulder, heavily loaded for long periods.

The experience had left me a little worried about flights in Asia where my typical total allowance will only be 25kg (20kg check-in, 5kg carry-on). To fix this I have put additional weight in the bicycle box... my cycling shoes, pump, and lock. I have balanced my luggage so that my check-in bag weighs around 8kg, and my carry-on 5kg. I will carry my smaller barbag as carry-on as well and hope they don't say anything. It only weighs around 1.5kg.

In Tokyo I sent home nearly 2kg of things I have bought or no longer need. If some airlines get awkward about what I'm carrying I have the option of wearing my jacket (430g), an open shirt over my t-shirt (150g) and my merino top (250g), so could shave off around 3/4 of a kilo from the carry-on bag.