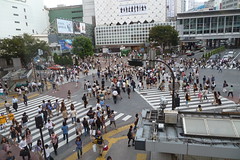 As part of my rest period before continuing my journey I am explored Japan (via bullet train), Tokyo being my first stop. I spent six days in Tokyo before moving on to Kyoto. While not the prettiest city, Tokyo has plenty to experience. Unfortunately due to my lack of planning the September Sumo tournament wasn't one of those things, but maybe that is something for another time. Instead I got a large dose of fine Japanese food, culture and night life, while staying at the Khaosan Tokyo Kabuki hostel (awesome hostel!). 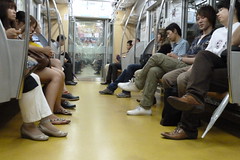 Commuting - In many ways I didn't found Tokyo too different from London, or any other major city. The metro is certainly no busier than London during rush hour. In fact I still think London is quite a lot worse. The Pasmo/Saica card system is similar to the Oyster card in London, except you can pay for things with it, ie drinks (that includes beer sometimes) at vending machines. Awesome! I sat on the metro and apart from looking distinctly western compared to everyone else, still felt like I could have been a local travelling to work. 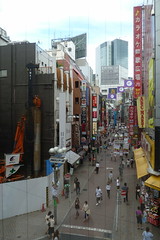 People - The people weren't physically as small as I'd expected, although are in general a little smaller (certainly in waistline!). So I didn't feel as much of a unit as I have done in some other countries such as China.

Cycling - One thing I didn't expect was how easy it is to cycle around Tokyo, given 32 million people (largest city in the world in terms of population) are living in the surrounding area. There are plenty of cycle paths and main roads which can accommodate cyclists. I was tempted to crack open my bike, but that would have meant re-packaging it for getting to Kyoto, and also the flight for Shanghai. Something I didn't have the willpower to do. The differences weren't in the city itself, but in the people, culture, mannerisms, food, toilets and lack of cash points. 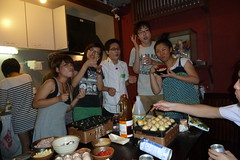 Language - The Japanese in general are quite a cute, quickly spoken nation. They speak so quickly it's nearly impossible to keep up if you're "trying" to learn Japanese. It is a great language to learn though, and fairly simple in terms of rules. The hardest part is speaking the language!

Respect - There's an air of respect in Tokyo. Despite having so many people, the city, its buildings, metro and trains are all exceptionally clean and well looked after. There's never any chewing gum on the pavement, nor food/newspapers left on the train, nor the smell of urine along alleyways (unless you go to Roppongi). It's quite a refreshing approach to life, and one that seems to taught on to each generation.

When presenting change they often do so with both hands, sometimes bowing. Saying please, thank you and good bye a lot are very common in shops and restaurants. It creates a friendly, non-aggressive atmosphere in general where ever you go. 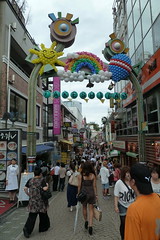 Women - The girls are far more beautiful than I had expected, and it just about tops the list on the countries I have been through so far. Walking down any high street you pass dozens of girls, dressed in the latest fashion, looking cute and nearly always perfectly presented. In shops or restaurants, when trying to buy something, you're often met with smiles and giggles as you try to overcome the language barrier...miming or drawing really bad pictures in my case which brings on further giggles.

Night Life - The night life isn't such a good aspect of Tokyo. It's crazily expensive. In one night you can spent £30 just on an entry fee, and £8-10 per bottle of beer. In terms of clubs you have two options, a) clubs/bars full of drunken westerners and slutty gold digging J-girls, b) clubs/bars full of Japanese people, virtually of all who you won't be able to communicate with. In both options you spend a fortune. Even a 3am karaoke night set me back £5 per bottle of beer. Given there are no night buses in Tokyo everyone goes out late, and stays out until 5am to catch the first metro train.

Food - The sushi in Tokyo is quite amazing too. The fish in a good restaurant will come from the largest fish market in the world. It doesn't come cheap though (noticing a theme here?). Tokyo is a great city, but not somewhere you can do cheaply. Or if you do manage to, you'll be missing out on a lot of the best parts of Tokyo. So far I am loving Tokyo!