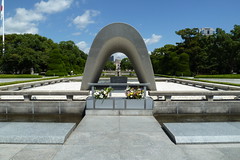 My visit to Hiroshima was a short one only lasting a few days. Using my rail pass I was there in a little over two hours from Kyoto. While Hiroshima was a beautiful city it didn't offer more than two days of sights, so I figured my time was best spent back in Kyoto and Nara. August 6th 1945 marked a historic day, Hiroshima being the first city an atomic bomb ("Little Boy") was dropped on. It wiped out 80,000 people instantly and effects were felt for a further few years killing an additional 20,000-60,000. Despite this the city has recovered quickly and now has a great buzz and feel to it. For those that don't like the immense size and population of Tokyo, at only 1.2 million people, Hiroshima offers a city experience but with nature closeby. 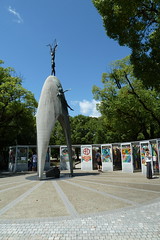 The main attraction in Hiroshima is the Peace Park. The site of where the atomic bomb was dropped, it has since been turned into a beautiful park full of memorials conveying the message of peace and need to abolish nuclear arms. Standing at the point where the bomb is calculated to have hit was a haunting experience. Given the affection I have grown for the Japanese people and culture, it's amazing to think 80,000 were wiped out in a split second, followed by many more in the aftermath. Some may argue it saved lives by ending the war quickly (rather than invading) but it still resulted in a large, sudden loss of life. Another memorial worth seeing is the children's memorial. [wiki]Sadako Sasaki[/wiki] at the age of 12 was diagnosed with leukemia from the after-effects of the atomic bomb and given one year to live. She tried to fold 1,000 origami cranes (limited by lack of paper) as Japanese stories say that if you fold 1,000 you are granted a wish. Sadly, she died before reaching 1,000 so her school friends finished the remaining cranes for her. A moving story, tourists have since folded cranes of their own and left them at the memorial meaning there are now thousands. 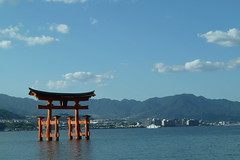 A 27 minute train journey (the trains are that efficient) outside of Hiromshima, there lies the island of Miyajima (accessible via ferry for 200Y or free with a JR pass). It is famous for the tori gates standing out of the sea during high tide (make sure you go during high tide!), a photo that is often found on the front of "visit Japan" tourist books and guides. While it was worth visiting, I did find it very touristy. I was the only westerner (!) but still surrounded by flocks of Japanese tourists going to see it. The island is also inhabited by "wild" gold-spotted deer, that mostly seem to hang around the bakery! It was an enjoyable 3-4 hours but I wouldn't spend any longer than that there. 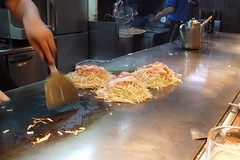 Known to outsiders as Hiroshimiyaki, Hiroshima has a unique version of the traditional [wiki]okonomiyaki[/wiki] dish...they put soba noodles in it (outrageous I tell you)! [wiki]Okonomiyaki[/wiki] is a great experience. Not speaking Japanese it starts by sitting down at a stool in front of a huge hot plate, pointing at pictures and making the global mime for beer. You then get to sit and watch as they cook everything on the hot plate, this includes the pancake underside, egg top side, pork, noodles and lettuce-like stuff that goes in the middle. The speed and skill they do it at is great to watch, especially when they flip the whole thing. Once cooked it is pushed over to you and while still on the hot plate you cut portions off, put it on your plate and eat! It's tasty food with lots of fun. I was a little hungry on my first outting and as some of you may know I can hoover up food pretty quickly. When I finished the okonomiyaki in three minutes the chefs and people sat next to me were at first in shock, then all started laughing. I got a few pats of (I think) respect on the back, and lots of Japanese I couldn't understand. I made sure on my second outting that the experience lasted a lot longer. 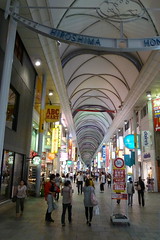 Running from the edge of the Peace Park right through the centre of Hiroshima is the pedestrianised shopping area, which is busy all day until after midnight. Splitting off it you have numerous department stores, restaurants and smaller shops. And beyond it bars, clubs, karaoke and "gentlemen's" clubs. The area is great to walk around or simply people watch. While I didn't bother to experience any night life in Hiroshima it was pleasant enough to walk around until near midnight just absorbing the atmosphere. A city I could happily work or live in.