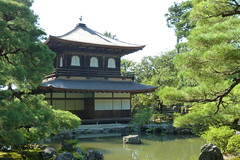 Having left Tokyo, my next stop was the former capital (until 1868), Kyoto. Originally listed as a target for the atomic bomb, it was reportedly removed from the list in order to preserve its many historical landmarks. Once there I realised why, where ever you stand you can literally throw a stone in any direction and hit a shrine or temple. With the many landmarks come hordes of Japanese tourists. It's still a beautiful, student-based city though of little over 1.5 million. Another of the smaller cities outside of Tokyo that I could happily live and work in. 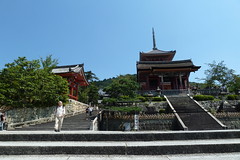 During my week in Kyoto, most days were spent visiting the many shrines and temples. The Golden Pavilion, The Silver Temple, Gion, Ninjo Castle, The Imperial Palace, the list goes on and on. The temples were beautiful to see, although not quite as spectacular as I had expected. To get around Kyoto the bus network is the cheapest way to do so. For 500Y (around £4) you can get a one day travel card. The bus system works very well although is a little confusing at first. You get on at the back of the bus and got off at the front next to the driver. Being Japan, the driver thanks everyone (sometimes over 30 people) getting off at a stop. All the drivers have a microphone headset, so over the bus speaker system all you can hear is thank you being repeating for every person getting off the bus. Strange, but I liked it!

I started to get a little bored with sightseeing and viewing temples so decided to focus my attention elsewhere. Given I was in Japan I decided it was time to make a proper attempt at learning Japanese. Using the very patient and typically cute Japanese girls (usually Manami, see photo) that run Hana Hostel as my self appointed teachers, in a matter of days I started to pick up the language fairly quickly (possibly due to "hot teacher" syndrome), although only the very, very basics (as it's cited as one of the hardest languages in the world). I definitely enjoyed learning Japanese and personally found it easier to pick up than Chinese or even some European languages ("hot teacher" syndrome again?).

The Japan rail pass is a fairly worthy investment. I'm note sure I'd buy one if I revisited Japan, but for my first visit it has been invaluable in getting around quickly as I'm time restricted (I have to enter China by the 19th September). 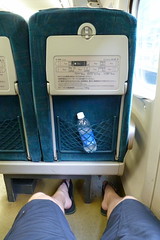 Firstly, you get to experience going on the [wiki]Skinkansen[/wiki] aka bullet train (although not the absolute fastest one, but you can pay the additional to upgrade which I did). An experience that makes the UK rail system look old and slow in comparison. You get so much leg room, even the tallest European wouldn't have a problem. Also in Japan everything is thought about when building something functional. For example, all the chairs always face forward on the train without a need to turn the train around. While being cleaned for the return journey, the seats are rotated/swivelled to face the correct way. Ingenious.

Secondly, it's is nice to have the luxury to jump on any train and whizz round the country at crazy speeds in relative luxury. It makes one feel like a celebrity or business man and the fact you paid £230 for a 7 day pass (!) is soon forgotten.

Thirdly, the people you see on the train. For part of my journey from Tokyo to Kyoto I had a middle-aged women sitting next to me. The first thing did she upon sitting down, was to take out two cans of beer and a packet of cheesy puffs and place them on the table. These were closely followed by a book written in Japanese, which just looked crazy to me given the text was written vertically. The cans of beer on the train reminded me of England. Not sure if that's a good thing.

One shouldn't always expect the best views though. The Japanese seem to be very much in favour of going through it, rather than round it, so you often find yourself travelling through tunnels cut into hill sides or areas completely covered in housing. In fact while going west from Tokyo, there almost always seems to be a constant flow of houses. I guess they have to fit 130 million people in somehow although it all seems to be along the train line. 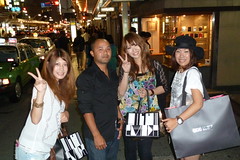 Having spent around a week in Kyoto I had once again (like in Tokyo) become quite settled and familiar with the surroundings. Nights spent drinking cans of beer along the river, days spent shopping and viewing the many shrines and temples. It was a great experience. I made a conscious effort to start learning Japanese and enjoyed helping Japanese people with their English, which has got me thinking about spending time there teaching English. Maybe once the trip has finished...