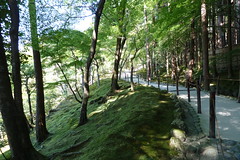 I only spent 16 days in Japan, but within that time I became very attached to it. A way of life that I could easily identify with and wish was mirrored in British society. From talking to people they aren't taught politeness or respect directly, it's something that children mimic from watching adults. Landing in China only further highlighted the beauty of Japan, and the failings (or loss of tradition) in the large Chinese cities. Watching grown men run for the last seat on the metro and all jump on it like it were a game of musical chairs was embarrassing.

All the photos for Japan can be found at the links below:

With the below list I am sure there are parts of Japan they won't apply to, but for the most part it is what I experienced. Japan may have some underlying issues, but there are definitely some key elements in its culture the rest of the world could learn from.

Politeness - never before have I heard the phrase "thank you" used so much or with such honesty. In the UK we often say thank you but in many ways it is said out of habit rather than with meaning. We certainly don't say it as genuinely as the Japanese nor is it followed by a bow and a smile. This creates a friendly, non-aggressive environment far more enjoyable to be amid compared with London. Even when on the train, the trolley girl bows when entering and leaving a carriage. As does the conductor. Amazing! In McDonalds I could buy something as paltry as a McFlurry (a Mcfwully, via pointing as the pronounciation is never recognised!) and still get a bow, thank you and a smile.

Respect - Don't sh*t on your own doorstep. Respect for one's self, and respect for those around them. Respect for one's environment. All phrases that can easily be applied and witnessed in Japan. People are always well presented, especially the almost doll-like girls. Whether it's raining or sunny you will often see umbrella's out to provide protection from the rain or uv. In restaurants, trains, or coffee shops, people clean up after themselves. There is no need for a cleaning service. Finding a bin in public can actually be quite difficult, so I can only assume people carry the litter with them until they are able to dispose of it, or at least that is what I did. Either way you don't see much rubbish or chewing gum on the streets or public transport. It's incredibly refreshing to be in an environment that everyone cares for and ensures its upkeep. London would be a far more beatiful and enjoyable city if the same ethos was applied.

Ergonomics - the man-machine interface, how one interacts with something they are using. In Japan every detail is thought of. In Japan a toilet is not just a toilet, it's probably the most sophisticated piece of technology your back-side is likely to ever sit on. ATM's make cute noises when dispensing cash and thank you, audibly, for using their service ("we thanking you for using our service, please come again"). Even on vending machines, the flap you open to get your drink has been thought about and has a slow close mechanism so that it doesn't slam. Many public toilets at the entrance have a map of the toilets for you to look at. No more walking into the toilets and having that split second delay of figuring out where the urinal is. [wiki]Kaizen[/wiki] (the process of continuous improvement) is clear in almost everything you come across in daily life.

Karaoke - for many westerners it can be a hard thing to embrace, at least while sober. Once you do learn to let go though, it's a fantastic experience. The Japanese are crazy for it and it shows as they were all far better at Karaoke than I was (I did put in a good Jonny B. Goode effort though). Japanese songs seem to suit karaoke too, being quite poppy and upbeat. There is a girl band, [wiki]AKB48[/wiki] that consists of 48 girls here. I don't quite know how it works, but it does as they are hugely successful so their songs are often picked during karaoke.