My first day of cycling from Fuzhou to Putian was the worst cycling of the trip so far. Fuzhou was a busy city (7 million people) and to the south (the direction I was cycling) it was surrounded by industry. It took me 35km to leave the city, houses, factories etc... and get out onto the open road. It didn't last long though as 10km further on I reached the town of Jingyang. This became a common theme and the countryside I had expected to see was hidden behind a concrete jungle of factories, mines, offices, and houses. After 40km I pulled over and for the first time on the trip so far, wanted to quit and go home. It was tempting to return to Fuzhou and take a train back to Shanghai and fly home from there. 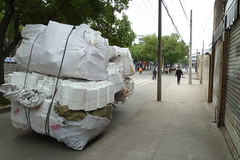 As I sat at the side of the road I put my MP3 player on, pressed play, and it randomly shuffled to a Lord Of The Rings soundtrack (courtesy of my great friend, Johnny S). Hearing the dramatic music roused me, spurred me to keep going. After all my journey can't be that bad. Frodo had to travel to Mordor and he didn't even have any shoes. So I continued and churned out the remaining 60km along the highway to Putian. Despite this I still wasn't enjoying the cycling, so decided to take a rest day (reflection day) in [wiki]Putian[/wiki]. The day was spent contemplating the rest of my trip. While the challenge and desire to complete the trip were still there, I didn't want to cycle in such conditions. Also my priorities felt like they are changing. I now wanted to move around, much more quickly than before and even revisit places to see people I have met along the way. To travel in such a way (ie via trains and buses) is a nightmare with a bicycle. In the end I decided I would push on, get to [wiki]Shenzhen[/wiki] (a good travel hub near Hong Kong with a population of 10 million) and decide what to do from there. 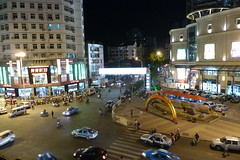 I was beginning to see how populated China actually is, despite its size. Statistics show that over 90% of the population live in 40% on the land area, making China feel far smaller than it is. Cities are divided into prefectures. Fuzhou, the capital of Fujian province has around 7 million people. It is surrounded by smaller towns, and 50km away effectively borders the city Putian (4 million people). Putian then borders Quanzhou (8 million people). This goes on and on along the coast and makes it near impossible to know when you have left one city and are entering another. Instead it feels more like one large city strung out along the coastline. 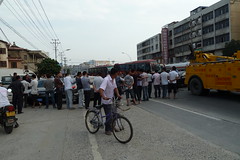 Because of the huge population in eastern China, the roads are much bigger than I had anticipated, often 4-8 lanes wide compared to the 2-4 I was expecting. The traffic is fairly constant outside of the city filled mostly by trucks and cars. It's boring cycling, but bearable. In the city centres the traffic is a nightmare, my average speed dropping to around 10-12kmh. It makes completing 100km a harder task than it should be. The air is often quite bad due to the pollution. You can always smell something, be it burning plastic, glue, coal, cement, or simply car fumes. It would often give me a headache for most of the day and leave me with a throaty cough by the end of the day (and a lot of quite nasty gunk to clear out of my nose). 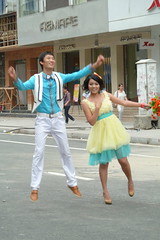 Of the five stops I did along the coast, Putian was my favourite and worth a mention. I managed to find a hotel for £10 a night right next to the city's pedestrianised high street, a very wide, currently closed road, filled with market stalls and shops. On a Friday and Saturday it is packed all evening until nearly midnight. People sit out eating street food and you can often hear Chinese firecrackers going off nearby. I was the only foreigner around and it showed as groups of girls would often come up to have a photo taken with me, invite me to eat with them, or try to start a conversation in broken English. I liked the city, it had a nice feel to it largely due to the lively centre.

From Putian, I pushed on and cycled another 600km stopping at Quanzhou, Zhangzhou, and Yunxiao (my total mileage now around 4700km) before finally stopping at [wiki]Chaozhou[/wiki] where I gave in and took a bus to Shenzhen. The days had become repetitive and boring as the cities were often hard to differentiate. The cycling was still awful, the G324 still a large highway offering little in the form of scenic views. Annoyingly, I skipped passed Xiamen, one of the nicer cities in China (which people kept reminding me later), so I could arrive in Shenzhen a day sooner. 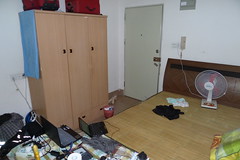 Arriving at Lo Wu bus station in Shenzhen, I had to cycle to meet a friend (Jingwen, from my previous visit) in [wiki]Shekou[/wiki], a small peninsula in the west of Shenzhen. The 35km cycle was like cycling the A4 through London but with more lanes. To keep my average up I stuck to the express way us much as possible, breaking off when I needed a rest. It still took me 1.5 hours to reach Shekou though.

Upon arriving I had my second problem, Jingwen couldn't speak much English, so communication had to be done via Google Translate. This was working well until Jingwen started mistakenly sending back the texts I had been sending her. Eventually I found a hotel as a landmark and Jingwen came to pick me up. 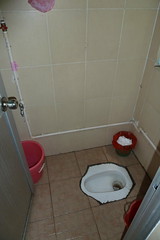 I had expected her to arrive on a moped, or electric bike of some sort, then I would follow her back to the apartment. Alas, my third problem. She turned up in a taxi. The taxi driver was sure it would be fine to stick my bike in the boot, so we did so with the front half of my bike hanging out and the lid of the boot resting on top. Every bump we went over I died a little inside as the boot lid would bounce up and down on my precious bike. After five minutes we reached a shopping area. A slight communication break down, Jingwen had brought me to eat (I had wanted to drop off all my gear first but say no more), so we grabbed some coffee and sandwiches. After we had eaten we walked to the flat. Jingwen was adament on wheeling my fully loaded bike (as I was the guest) despite wearing 3 inch heels. As a precaution I slyly held onto the saddle to stabilise the bike as I could see her and it ending up in the road (the Chinese have a habit of walking in the road rather than on the pavement).

The apartment we arrived at was tiny. You walk into the bedroom which is large enough for a double bed and wardrobe. In fact it was so small the air con (a fan in this case) had to go on the bed. The kitchen was a cubical, the toilet was a cubical. That is all the apartment consisted of. So where to put my bike? Luckily there was a small balcony area, so I dismantled my bike as best as possible and it was able to fit neatly in the corner. 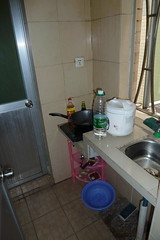 There was no shower in the European (excluding France) sense. The toilet (a hole in the ground style toilet) was the shower room, and the shower was a bucket of water from a cold tap. I couldn't decide whether it was ingenious or unhygienic, but after going to the toilet I didn't need to move in order to take a shower. It was clean so I was happy.

The kitchen had a small electrical cooker with a frying pan, rice cooker and a sink. No fridge, or any other appliances. My biggest problem was the bed, there was only one. To make matters worse, there wasn't any bedding. On top of the mattress was a beach mat, the straw/bamboo sort your parents normally have. While Jingwen did have night-wear, I was left to sleep in my boxers so would end up slightly cold with mat imprints all over my body come the morning. It was rustic but not particularly comfortable living!

Out And About In Shenzhen 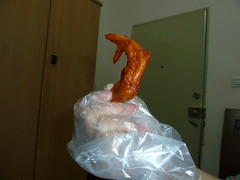 On our first full day out I was bought a bag of spicy bird knecks (you bite the meat off the bone) for a snack as if they were a bag of chocolates. Judging by the cartoon picture on the front of the bag I was eating Woody-the-woodpecker and his relatives. They weren't that bad, although I couldn't get the thought of what they were out of my head. There wasn't much meet on them, which raises the question what is the point? At least they hadn't bought me the feet which were actually an option (no, be bought those too, see photo). People in Guangzhou and the surrounding area are known for eating any part of any animal. So much so that even people in Shanghai joke about it.

Living with a Chinese girl proved interesting. Jingwen wouldn't let me do any cleaning or laundry. Upon going to do my laundry I was refused access to the laundry bucket (the blue one, the pink one is for showering!). I decided to stand firm and insist I do my own laundry. After a 15 minute stand-off I finally gave in and let Jingwen wash my clothes (amazingly well by hand). It put to shame my attempts of hand-washing my cycling clothes when in Europe and silenced my opinion that you can't beat a machine wash.