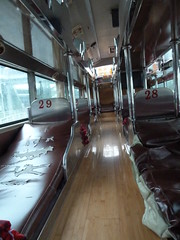 I decided to take a break from the bike having cycled part of eastern China, given how poor an experience it had been. I was still staying at Jingwen's apartment in Shenzhen. A few days after I had arrived she was heading off to her home village for her mother and grandmother's birthdays and had kindly invited me to join her. I gratefully accepted as the opportunity to immerse one's self in local surroundings and life is often a rare one. We booked a sleeper bus from Shenzhen to Guigang, a city near her home village (at a cost of 200 yuan each). The bus left at 1900 from Futian bus station in Shenzhen. It was a typical Chinese sleeper bus, in that I was too wide for the bed (my shoulders had to rest on the frame rather than go between it) and fractionally too long to sleep straight. So it meant sleeping on my side with my hip digging into the thin cushion with my legs sprawled out in the aisle. 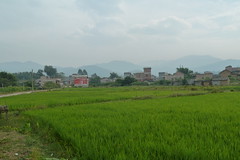 At 0400 Jingwen and I were awoken by the bus staff. The bus had arrived in Shilong, the small town close to her village (and an hour before Guigang). We hastily got off the bus (to allow it to continue to Guigang) and were left standing in the dark on the side of the road. Luckily there was a bike-man nearby otherwise we would have had to wait until nearer 0700 for a mini-van-bus. We paid him 20RMB to take us the 20 minute ride out into the darkness of the countryside to Jingwen's village, Yongxing. It was a far from comfortable ride, his vehicle being a bike with a boarded metal cage stuck on the back for people to sit in (the sort of thing you see in India a lot). The 20 minutes were spent bouncing around in the cage as we went along a "road". We arrived near the house and found our way in the darkness to the front door. There wasn't a greeting as such (more a stare), I think at that early stage Jingwen's mother was still a little sceptical of the ckunky westerner coming to stay in her house. 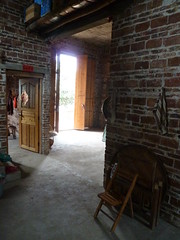 My first day was spent getting familiar with the surroundings. The house was a large concrete structure with three bedrooms, a common area/kitchen, a roof terrace and a yard at the back (where the toilet/wash area was). There were no taps and only a few electrical points. The floor was concrete (and dusty) and the walls were bare. It was a simple, rustic way of life.

We walked around the village and I was shown the village school, Jingwen's old home and the local shop. Her old home was effectively abandoned apart from a few chickens living there. The houses are typically quite big, although very bare having no plaster or paint. Gone are the traditional ways of building houses and instead they are all built from concrete blocks, similar to what you see when a new office is starting construction (but with a lot less light openings). It's a cheaper, faster and longer lasting way of building houses but definitely not as romantic.

The Only Westerner In The Village 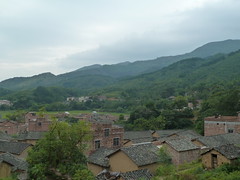 In fact I was the only non-Chinese person for over three weeks. As I walked around I was constantly stared at. Even the noisest group of adults or kids would be brought to silence as I passed. They would either just stare at me (sometimes in fright), smile and wave, or start whispering between themselves. Walking around with Jingwen the older generations would ask if I were her husband (and if not could there daughter be matched with me). While it annoyed Jingwen I found them to be quite sweet, especially the grandparent generation with half their teeth missing as they smiled at me. Conversations were done using a combination of my Lonely Planet phrasebook and Google Translate on my phone. I did long to be able to have a proper conversation in English! 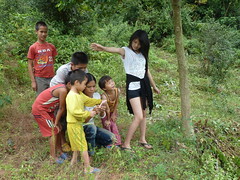 People seemed obsessed with my appearance, notably my hands, ears and skin. The adults would only talk about it, but the kids seemed intent on stretching my skin, pulling my ears and prodding my hands. And not just once, but everytime they saw me. My softer pale skin, relatively padded soft hands (compared to their bony, leather-like hands) and larger ears provided hours of entertainment. And how could I forget, worst of all, their obsession with my body hair. I would know about it as every minute or two I'd get a jolt of pain as they would rip out a few hairs from my leg. I was a man on the edge when they tried plucking one of my beard hairs. 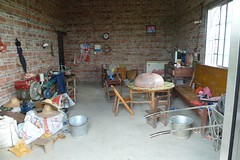 Everyday my diet consisted of rice during each meal. Rice in water for breakfast, and normal bowls of plain rice (usually 2) for lunch and dinner. They would be accompanied by various dishes such as fish, boar, pork, chicken, and a wide selection of vegetables. All of the dishes were either freshly bought from the market or home grown. £10 worth of market food could feed the whole family for a couple of meals. They are cooked and placed on plates in the centre of the table and you pick at them with your chopsticks. The food was very tasty, although a long way from western-style Chinese food, or any food that I was accustomed to. As usual the Chinese cook every part of every animal, so I'd find myself have to pick around the chicken feet, pig tendons, fish tails and large lumps of boar fat. And when offered the fish head, including its eyes, on two occasions I had to kindly decline. The kids snapped it up instead!

I did on one ocassion cook my own dish. Armed with eggs, garlic, onion, ginger, chilli and tomatoes I cooked the feasibly best Indian style omelet I could. Cooking down things such as onion and garlic in China seems fairly rare. So when my rather plain looking omelet was served up, they were amazed at the flavour hidden within it. It went down fairly well and while the adults only tried a small amount, the kids were at it constantly. 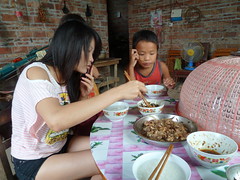 The meals were a very social event, often with ten people or more all grouped around a table sat on tiny stools/chairs (the sort you find at an infants school). Grand parents, parents, siblings, cousins...whoever could make it to the meal would turn up. I was often the centre of conversation. I could tell either by the use of the word "Yingguo" (prounced In-gwo meaning "England" as most of them called me) or by catching people glimpsing at me. If I gave a smile it would get everyone smiling and laughing. Jingwen would never tell me what was talked about, although I think most of it was positive. Most likely it was observation based, about my nose or skin, or about money (my fortunes specifically), or about me being good match for marriage (based on observation and money!). 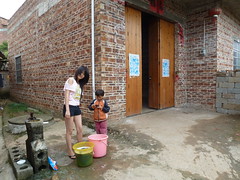 The family structure is very different from the west. Often the parents, especially the fathers aren't around as they are off working, sometimes in completely different towns. The children are left to be looked after by the eldest child. In this case, while we were in Yongxing, it was Jingwen. Her direct siblings were all in their twenties, so off elsewhere. Instead we were surrounded by and would look after her half brothers and sisters, the children of her uncles and aunties. They even refer to cousins as brothers and sisters, something parts of the UK should do as it'd surely reduce the six-toed baby population! The grandparents were the designated cooks, and would prepare and clean up all the meals. 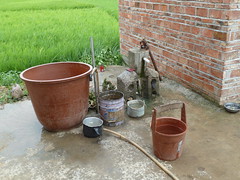 I was forbidden (after many attempts) to do any washing up or laundry as the women wouldn't let me. In fact any form of cleaning. In parts of China it is still seen as a women's role and even the sight of me merely filling up a laundry bucket with water would have them running over and dragging me (no lie) away from it. Naturally, I didn't mind this.

When shopping though, the women would carry all the shopping, often bags full weighing quite a lot. My one chance to flex the guns and show off my western strength and I wasn't allowed. Sometimes they would let me carry a bag oranges which made me feel even worse. I can only compare it to standing in a pub holding a half pint of beer in one of those little glasses while everyone else has pints. 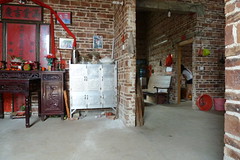 My failings in the western world actually turn out to be strengths in China. Admittedly I've yet to find a country that likes my two-tone tan from cycling so much. Still, pale white skin is considered beautiful here. I am taller (height is a good thing) than most of the population. Also thin is bad... they like a bit more padding, not fat, but in between (which is where I think I am). I found this out by the amount they kept trying to feed me (the term "feeders" comes to mind). I lack blue eyes, but blond hair is definitely sought after. And finally body hair. A hairy man is considered sexy in China. I'm not talking like [wiki]Bigfoot[/wiki], but they apparently like a well proportioned amount of body hair, especially on the chest! 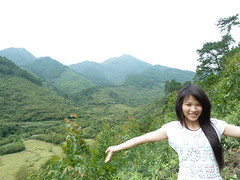 The Chinese mentality to litter is quite depressing, especially to watch as they discard litter anywhere without remorse. Granted there are no litter bins about in the villages and the only way to deal with rubbish is to burn it. Despite this it is rarely collected together in one place. While walking through rice field kids will open sweets and just throw the packaging on the ground. This means you often see a lot of litter around the Chinese countryside. Just as bad they even litter right outside their own homes. It's a sad thing to see.

Unfortunately, given many people venture from the village to the cities, the mentality has spread to the city. Even in cities that have public bins dotted around and garbage collection, litter is still dropped on the ground. China is effectively one big public bin. It's something they must change given their large population or China will only become worse in appearance. At current, people live selfishly and without the foresight of what they are doing to the surroundings they have to live in.

The two week village experience had been, and probably will be one of the highlights of my trip. A unique experience and an insight into poorer, rural China. I was glad to leave though, firstly as no one spoke English and secondly as the days were becoming repetitive (it's not a very stimulating lifestyle). Little did I know I would be returning in four days!