While on my trip to Australia, I was lucky enough to be able to base myself in Shenzhen (Shekou to be exact, on the mainland near Hong Kong). Having cycled from Shanghai to Kunming (skipping a few bits in the east) I took a bus back to Yangshuo, and then from Yangshuo back to Shenzhen. My original plans were to fly from Kunming to Calcutta, but while crossing China my brother invited me to spend Christmas with him in Hanoi. I accepted his offer but it meant I wouldn't have enough time to fit India in before Christmas. Instead I decided to reverse my schedule and go to Thailand/Malaysia first, then go to Vietnam for Christmas, then fly to India before finally ending up in Australia.

They have never mixed very well. The problems start even before you get to the airport. The arduous task of getting to and from an airport can be a real pain, as most airports are surrounded by fast highways and public transport systems that won't allow bicycles on board. You either box up your bicycle and lug around 30+kg of weight via public transport (which is no fun task in hot, humid Asia), or try cycling to the airport. The latter not only being difficult to do but once you get there you then face the dilemma of whether the check-in staff will accept your un-boxed bike.

The Easy Way Out Of China

Yet, despite all the above issues, there is an easy way for a cyclist to get themselves and their beloved bicycle out of China. Given the toils I've experienced getting to/from Istanbul Ataturk, Tokyo Narita and Shanghai Pudong airports, to say the journey to Hong Kong International was a heavenly experience would be an understatement.

I was staying in Shekou in Shenzhen (there are plenty of £10 a night hotels dotted around). From Shekou I cycled 2km through a modern, rich suburb, stopping along the way at Starbucks for a coffee, before finally reaching Shekou Ferry port. From there I took a ferry to Hong Kong airport for 260RMB (£26). Note, it's not the only ferry port that you can take to the airport, there are others dotted around the mainland, although costs may vary. There were a few stairs to carry my loaded bike up but nothing too strenuous before I wheeled my bike onto the ferry. It then took around 35 minutes to reach Hong Kong airport.

By taking the ferry you don't officially enter Hong Kong. You are taken directly to the airport which is "international" territory. Because of this they take you to a separate check-in area, effectively putting you in international limbo. It's done this way because if you were taken to the standard check-in area you could walk out of the airport without having a Hong Kong visa!

This has a number of benefits. No immigration queues to enter Hong Kong just to get to the airport (which on past experience take ages). You also have a check-in area that only other ferry passengers can use, so the queues are minimal if non-existent. 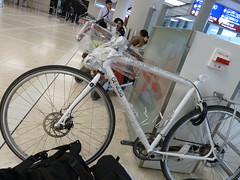 I wheeled my bike off the ferry, then spent 15 minutes preparing it for check-in. This involved taking off the pedals, lowering the seat post, turning the handlebars, removing the rear mech and zip tying it to the frame (I didn't bother doing this the second time around, and prefer not to in general now), and then finally wrapping cling film (I bought a 60m spindle in China for £1.50) around parts of my bike!

I walked over to the check-in desk. There was no queue at all. I was checked in within a few minutes and someone came to take my bicycle away. They had no qualms in taking my bicycle un-boxed. The desk (and most of the other 30-ish desks) didn't appear to be an official airline one (I flew Sri Lanka Airlines), but rather a desk that represents the airline. In my case the desk represented around four other airlines, so they probably don't know the exact rules around bicycles. Something worth keeping in mind. I then walked through airport security (again a separate one for ferry passengers). There was no queue, not even a single person (apart from the security guards). A mono-rail then took me too the departure gate. The whole process took no more than 20 minutes, and my total journey time, door to departure gate was around 1.5 hours.

I was also reimbursed $120HK transfer tax for some reason, effectively reducing my ferry ticket cost to £14, giving me some spending money for in the airport. I'm now sat in Hong Kong airport sipping on a coffee while using the free wireless the airport provides (and it's fast!). A first class experience for an economy price. And now to focus on my next dilemma.... I'm flying to the currently flooded city of Bangkok!