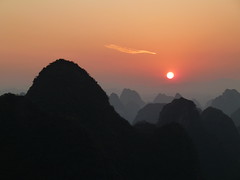 Having had such a great experience when visiting China in November 2010, I wanted to include it as part of my cycle tour from an early stage, despite it not being a direct route to Australia. Was it worth including? Partly, yes. It was a very mixed experience full of extreme highs and lows. A coin with two sides, on one side there was a moment when I seriously considered throwing in the towel, and on the other one of the best travel experiences I'll ever have, being invited to live in a Chinese village. I also managed to clock up 2,730km of cycling, which isn't far off the originally planned 3,000-3,500km. Here is a summary of my experiences.

I don't know enough about ancient China to properly comment on how it compares to modern-day China, but I'm certain the yacking, spitting, littering and general rudeness are relatively new habits born into their culture. While I love China in many respects it's a shame it has forgotten it's effectively magnificent history and developed newer less attractive traits. I could be wrong, but to me the image of the government is reflected in the people and some of the selfish habits they have developed.