Having visited Yangshuo before it was nice to be back. It allowed me to visit familiar sites including the Showbiz hostel with it's awesome roof bar. Many a morning was spent up there drinking coffee, and many a night, drinking beer for 50p a pint, something I was able to re-live. I enjoyed the surrounding area, so using Yangshuo as a base, would cycle off for one day and return the next. One long day south-west to Luizhou (145km) and back the next, and then another south-east to Hezhou (120km) and back. I spent a few days cycling around the closer Yangshuo area (there are dozens of cycle paths) along the numerous cycle routes before deciding it was time to move on. 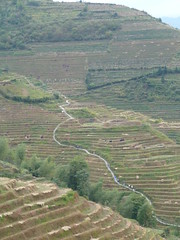 On my previous visit I missed the chance to visit [wiki]Longsheng[/wiki] and see the rice terraces, so didn't want to miss out this time. A short days cycle (70km) mostly along the G321 got me to Guilin where I stayed the night. The next day was possibly the hardest of the trip so far, and will probably remain so. It was a 90km slog, but largely up-hill. There were very few flat portions, it was either spent climbing, or gripping the brakes tightly as I whizzed down-hill. It was still one of my favourite days of cycling, despite the road (G321) being slightly dangerous at points. The mountainous scenary continued for another few days providing me with some good conditioning.

Sadly I had visited Longsheng (the Ping'An village in particular) at the wrong time. The rice crops had been harvested, so the terraces were left bare. It was still an amazing site to see, but would have been better in the spring (when they are filled with water), autumn (when the rice turns yellow) or winter (when it's covered in snow). Given the changeable weather I stayed an extra night to see the terraces when it was cloudy/misty and also clear.

The Road To Guiyang 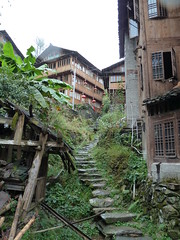 It took me four days to reach Guiyang from Longsheng. I continued along the G321, my first stop after only 50km in [wiki]Sanjiang[/wiki], a beautiful village set in the valley. Unfortunately I didn't take advantage of the short distance, waking up late and leaving Longsheng by 1400 meant I arrived at Sanjiang not long before darkness set in, so I had little chance to see the surroundings. However, the short day allowed me to rest my legs so I was able to increase the distance on the following days along the G321, clocking up over 200km. 110km got me to Rongjiang where I spent the night, and a further 100km took me to Qiannan. The final day of cycling into Guiyang wasn't very pleasant. At 110km it wasn't too far but at around 1000m altitude it involved quite a bit of climbing and was clear I was nearing a large city. The roads became much busier and reminiscent of eastern China as I entered [wiki]Guiyang[/wiki]. I managed to find a typical £10-a-night hotel near the centre and went out for some food. I had originally planned to take a bus back to Yangshuo, but upon thinking about it I decided I would push on a further six days to Kunming (as per my original plan) to get the distance under my belt.

The weather had by now started to get quite cold, temperatures during the day only reaching around 16-19C and by night dropping to nearer 8-11C. I was still able to keep warm with my Summer cycling clothing, but wanted to get the distance out of the way quickly before it got any colder. 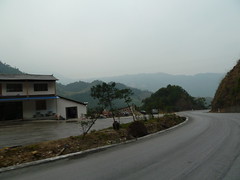 Following the G320 my first stop was a relatively short day at the town Anshun. It was a typical Chinese town (they all begin to look the same after a while) but had a few tourist attractions I wanted to see ([wiki]Huanggoushu waterfall[/wiki] and Longgong cave). Given I was time restricted though I decided not to spend a day there, and cycled on. The next day I cycled 130km to a small town, QingLong. Finding accommodation was a nightmare, as despite having my phrasebook, nobody seemed bothered about helping me. I eventually found a fairly nasty hotel costing £5 a night. It was an eat-sleep-and-get-out job. Over the next few days I cycled to and stayed in Panxian, Qujing and Songming before leaving myself a leisurely 70km cycle into Kunming. As usual entering a major city wasn't much fun. I had been to Kunming before (a great city) but on this occasion was tired and over schedule. I arrived at 1700 and went straight to the bus station where I bought a sleeper bus ticket back to Guilin. Given I had a couple of hours until my bus left I went and stuffed myself full of KFC. I had done the additional 600km which felt good as I was nearing 7,000km in total. 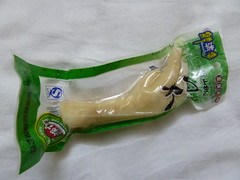 Once in Guilin I cycled to Yangshuo to meet up with Jingwen. Her passport had finally been processed and she had collected it in Guiping! We spent a few nights in Yangshuo before returning to her village outside of Shilong to say one last goodbye to her family. Amazingly she managed to get us sleeper bus tickets back to Shenzhen from Shilong for 80RMB (£8) each. I soon found out why. The bus itself was very nice, but the route it took was awful. Constant stopping to pick up and drop off people along roads I wouldn't even cycle down. I managed 2 hours sleep as the bus bounced and bumped down the roads. We arrived back in Shenzhen at 0500 and went back to the apartment to catch up on missed sleep. China was effectively complete. I spent a few days in Shenzhen planning my next move, a trip to Thailand. Given I had now opted to spend Christmas in Hanoi with my brother there wasn't enough time to cycle India, but just enough time to take in some of Thailand!