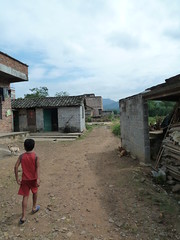 Firstly, this isn't my whole opinion, rather part of it. Nor does it apply to everyone. On a difficult day when I'm feeling negative the points do resonate with me more than normal but that doesn't mean I don't see the positive side of travelling. Just in the last half a century travel has become much more available, so much so that everyone is doing it... or so you'd think. If so, you'd be wrong. Also just because "everyone" is doing it, does that make it right? Are we abusing travel? Seeing and meeting many travellers and the impact they have on the areas they visit (myself included) has left me somewhat pessimistic. Could travel be a bad thing?

Firstly to give a little grounding to some of the points, it's worth looking at who actually travels. Googling around shows that roughly only 2% of Chinese, 2% of Indians and 30% of Americans have passports. Being the three largest countries in terms of population, that means of the 7 billion people in the world just under 3 billion people (around 40%) don't have a passport. Here are the calculations:

The next eleven countries in terms of population are (in order) Indonesia, Brazil, Pakistan, Nigeria, Russia, Bangladesh, Japan, Mexico, Philippines, Vietnam, and Ethiopia (Japan being the most developed of those countries). Making the assumption that on average they have a similar passport percentage to China, let's say 10% to sway on the side of uncertainty and allow for the skew that Japan creates. That would mean another 1.3 billion people don't have passports. That already cuts down the possible number of the world population that could own a passport to under 40%. And of that 40% how many own a passport but don't travel? When I say "travel" I mean the adventurous sort and not a holiday to Sharm El Sheikh. The truth is that of the world population very few (at a guess less than 8%) will own a passport.

So on the assumption only 8% of the world's population own a passport it is already quite a privilege. The majority of those passport owners will come from wealthy, privileged (relatively speaking) and typically western backgrounds. When I say privileged that can simply mean country of origin as this will include political policies (ease of obtaining visa's) and exchange rates (in terms of affordable travelling).

Of the 27 million Chinese that own a passport, many will struggle to leave China. While I am easily able to visit China by merely obtaining a £40 visa, for them it is far more complicated to visit the UK. Chinese RMB is infamously kept very low in relation to other currencies so residents have to save for longer to be able to afford to travel (probably for a shorter duration). Also a visa is harder to obtain (they must have enough collateral which is frozen for many governments to have the confidence that they will return before a visa is issued).

So travelling is still a largely class and origin based activity and quite a luxury in relation to the rest of the world. And usually done by people from western societies. So why is this bad?

Much like a carbon footprint, I believe there's a travel footprint. Every place you visit you can potentially change. It depends upon how well you travel as to the size of the footprint you leave. A good traveller will have a smaller footprint (ie leave little trace that they had been there). There are numerous reasons why people travel. Here are a few and how they affect the communities visited.

If I could redo my trip I would do so but with less focus on cycling and more on knowledge sharing and volunteering. Cycling would merely be the mode of transport.

The key turning point which got the wheels in my head turning was while cycling from Krabi to Ko Lanta. I met a Dutch guy named Fedde (theturningwheel.org) cycling in the opposite direction. As he travels from place to place, he stops in villages to share and spread knowledge for improved sustainable living. Educating people that have not had a chance to be educated, and providing them with knowledge to help improve their lives. In his case solar heating systems to help cleanse water so it is usable for cooking and washing, or to cook rice and boil eggs. By doing so he often stays and eats with the people he helps, usually out in remote villages and towns. It's a true travel experience as he is immersing himself with the locals, but with a small travel footprint (ie not getting drunk or spending huge amounts of money relative to what they earn). Instead he simply passes on knowledge, lends a helping hand, then moves on. It reflects in the photos he takes too. As he's actively involved with the people the photos seem more natural and tell a fuller story, compared to snapping a poor guy cutting some fruit to make his day's pay. It's a shame more people, myself included, don't travel in such a way.

Growing up I was always taught when wild camping to leave the site as I found it and a little better (ie pick up any pre-existing rubbish). This philosophy could easily be applied to travelling. Sadly, in my opinion, it's quite the opposite in many cases. Travellers seem to be getting younger and with it, given today's generations (I'm sounding old now), comes a lack of respect.

Next Time You Travel

Think about where you're going and how you could help. I know I will. One of the main epiphanies I've had from this trip is that I wish I had helped out while travelling. I'm certainly in a position to do so (from a western, money-rich background, well educated etc...). Bangkok is a prime example of where I could have chipped in.

So what can you bring to the table apart from money, taking photos of everything, and getting drunk? For every action there is always an equal and opposite reaction (Newton). So think about the consequences of what you do before you do it! Stay away from areas already flooded with tourists. Instead if you find somewhere that doesn't have a HostelWorld listing, then you're probably going in the right direction.

Having cycled through areas without any tourism infrastructure whatsoever and stayed in a poor Chinese village for a couple of weeks, the travel experience was far richer and more interesting than when I've visited the typical tourist routes (says he sat in Ho Chi Minh backpackers area, which looking around really backs up my points!). I can only imagine the experience being even richer and more satisfying when voluntarily helping improve someone's standard of living (especially via sustainable methods). Just like how [wiki]The Littlest Hobo[/wiki] used to. And you'll have far more interesting stories to tell when you get back home compared to the usual backpacker stories.