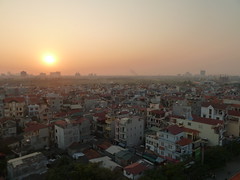 I decided to leave the bicycle in storage in China while going to Vietnam as a respite from cycling. I would also be spending Christmas and New Years there, so wouldn't have a chance to cycle much. Flying to Hanoi wasn't the cheapest option but the alternate option of doing a 22 hour bus ride (with Chinese size sleeper berths) was beyond me. I had already clocked up over 30 hours. Getting there turned out to be something of a nightmare. Upon leaving China, Jingwen (who was coming to spend Christmas with my brother and I) was stopped and not allowed to depart. Feeling awful in my decision, I left her standing at immigration and still took the flight. I felt bad as it wasn't the most pleasant experience for her first trip out of China. It took her an additional week to get everything fixed and purchase another flight before she made it to Hanoi. 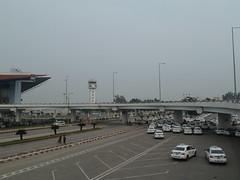 It was my first visa-on-arrival to a country and it went very smoothly, definitely something I would do again as it's less hassle than going to an embassy. Walking out of the airport was like another other... avoid the first taxi drivers you meet as they are usually the expensive ones. I was determined to take the bus given I found out it cost 4,000VND (12p) versus 300,000VND (£9, it's 27.5km to Kim Ma) for a taxi. After being sent in the wrong direction and walking up a highway for 10 minutes, I walked back to the airport, this time walking down the highway in the other direction. Again it was the wrong direction. During all of this I was constantly hassled by bike taxi's and people wanting a dollar to tell me where the bus stop was. The ordeal lasted nearly an hour before I finally found the bus stop. For those looking for it it's actually quite simple. From the airport walk outside and turn left. Look for some stairs to take you to the level above (where people departing are dropped off). Once up there follow the curving road that goes over the highway. The bus stop is at the end of it (ie opposite the airport on the other side of the highway). You should see a number of people sat around waiting for a bus. Bus number 7 takes you all the way to Kim Ma bus station where it terminates. The journey time is around an hour. It can get really busy (and you'll most likely be the only non-Vietnamese) so try to get a seat! Simply jump on and someone will come round collecting money. Once at Kim Ma, I walked around 2km to Al's house, using my GPS for guidance.

Be careful when taking a taxi in Hanoi. They typically should be around 10,000VND per kilometre. I had my GPS with me so would track any journey's taken and could correct the taxi driver when he was trying to take a long route. In most cases they take a direct route. In every taxi though I found the meter ticked over faster than it should have. For example a journey from the old quarter to Kim Ma on my GPS was 3km where the meter would say 5km. That's how they overcharge you, although it happened in every taxi. I didn't mind pay 50,000VND instead of 30,000VND. When they charged more though, I would argue with the driver and eventually get out and take a different taxi.

I arrived at Al's by around 1800. We quickly ordered in some food while playing table tennis and drinking beer (£8 for a crate of 20 large beers), then after eating, ventured out on the bikes. I had yet to learn to ride a manual bike so sat on the back of Al's bike. It took a while to get used to not controlling the bike, let alone whizzing around at speeds of well over 70kph in the dense traffic while intoxicated (Al included). We visited one of the main bia hoi's areas ("toilet hoi" as the guys call it was the one we went to, as it has an alley toilet nearby) in the old quarter before moving on to a couple of expat bars, one of them being Rock City. I enjoyed them but it didn't really feel like Vietnam given the majority of the people I was surrounded by were westerners or super-rich Vietnamese out partying. It was a nice introduction into Hanoi night life though.

Strange Happens In The Night 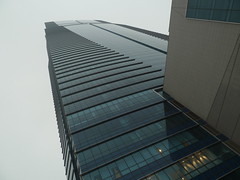 On the way home at 0400, Al decided to take the back roads home to see if he could find a short-cut. Instead we came across a market street where they were preparing meat for sale for the coming morning. It was an odd site, with huge cow (?) ribs stripped off all meat lying around the street (it reminded me of something out of Jurassic Park), and see-through bags full of red meat all over the place (more than I'd every seen in one sitting). As we idled through, in front of us one woman (call her Woman A) was marching off holding two large plastic bags full of red meat (imagine two bags with bedroom pillows in, but instead of the pillows, red meat! It was a lot). Another woman (Woman B) came running after her and branding a knife slashed open both bags causing the meat to go all over the road. Woman A then slapped Woman B, so Woman B retaliated by chasing her around wielding the knife she had. A guy, possibly a husband, decided it would be a good idea to also get involved. Woman B ended up throwing the knife at the guy, but without causing harm. In Vietnam apparently anything is a weapon, so upon disarming herself she looked for another weapon. The closest thing was a large bone with some meat on the end. That got swung about and eventually thrown at someone, at which point Woman B then resorted to the boot of her car which was parked nearby for more weapons.

During all of this other people were running in and grabbing the free meat that was lying around (including the bone that was used as a weapon). Woman A noticed her newly bought meat being pinched so started kicking and punching people as they swooped in to take it. It was chaos but hugely entertaining. The action came within a couple of metres of our bike, so we decided to move on before we got sucked in. We had thought about filming it all, but that would have definitely got us involved, so we decided not to. It was one of the best highlights of my time in Hanoi.

Back To Normal Life 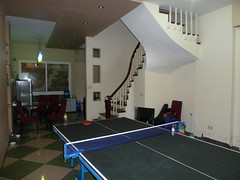 The great thing about staying with my brother was that it allowed me to taste normal life once again. We went climbing, played football, had long lie-ins, watched movies in the living room, and played on the Xbox 360. On one occasion when playing football Al and I got put on the team mostly made up of Vietnamese. The contrast in organisation (and tackling skill) to the other team (mostly westerners) couldn't have been clearer. We seemed to have four wingers and two strikers, all of which had no concept of passing the ball backwards, and were intent in shooting from angles not much different than when taking a corner!

During the day we would pop out to see the odd attraction or to go to a bia hoi. One of my favourite places was around West Lake. There are numerous roof bars which provide great views over Hanoi. The drinks aren't ludicrously expensive like in other cities (ie Bangkok). Instead a smoothie might set you back 50,000VND (ie £1.50). One of Al's house-mates was working on his time lapse of Hanoi so we joined him on one of the roof top bars. It's an excellent time lapse video of Hanoi, worth the three minute duration to get a taste of what the traffic is like. December is wedding season in Vietnam as it's cooler, so around the botanical gardens were dozens of couples having wedding photos taken. 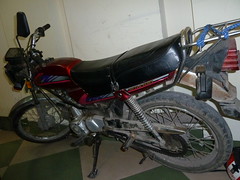 While Al whizzed around on his Suzuki FX, he kindly left me his Honda Win100 to learn to ride manual on. I had around 30 minutes of practise on a back-road before making my way out into the heavy traffic around Hanoi. The Honda was a forgiving bike in terms of my fairly poor clutch control. The hard part was focussing on the bike and the traffic at the same time. The faster I went the faster my brain had to work. I didn't go very fast! Nothing much over 40-50kph whereas in Thailand I had reached 85kph without a problem, albeit on an automatic and with far less traffic. It just takes time to learn the traffic and be able to read it confidently, especially when cutting red lights. 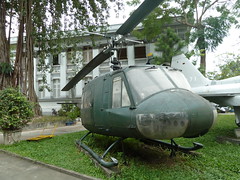 To break up my stay in Vietnam I decided to fly down to Saigon and see some of southern Vietnam. It was also 30+C so nice and warm compared with Hanoi. I once again ventured onto the public bus to get to the airport and flew via Jetstar to HCMC (for £100 return).

HCMC felt a lot more western compared to Hanoi. Great riches and shopping areas, even the traffic, while still being majority bikes did have a lot more cars and the cars were less forgiving than in Hanoi. 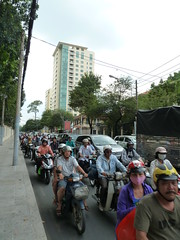 The days passed very quickly in HCMC. The war museum was a highlight and while very one-sided, was quite an eye opener. Thai Binh market is not worth seeing. It's generally geared towards tourists and from what I found, quite expensive (even after haggling). There is a far better locals market at the western end of Pham Ngu Lao (near the backpacker district). The Mekong delta is worth visiting. There are plenty of tour groups to avoid, I was lucky in finding a good one as part of a day trip out of the city (I didn't write down the name though). I found District 5 quite interesting as it got me away from the backpacker area and into what felt like normal city life. It's also home to one of the very few China town's in Vietnam.

Upon leaving Ho Chi Minh I managed to leave me phone behind at the Long Guest House. Not through carelessness, but rather shallow pockets on my trousers (and the phone slipping out). I only noticed upon boarding my flight back to Hanoi. I accepted it was lost and went back to my brother's house. Amazingly, the hostel emailed me to say they had the phone. Even better, they posted it to me free of charge, despite my offers of sending them money to cover the costs (and a bit more). It was a great hostel to stay at, topped off by them posting my phone all the way to Hanoi. Four days later I was reunited with my phone!