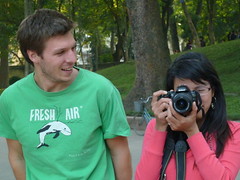 Having spent the first part of my month in Vietnam at Hanoi and then visiting the south of Vietnam, I returned back to Hanoi on Christmas Eve to spend Christmas and New Years with my brother. Hanoi was by now quite cold relative to other parts of my trip. In fact the coldest so far by a long way, the average high around 14-18C whereas most days of my trip have been 25C+. I was also confident enough to ride around regularly on the Honda Win100 although still quite slow compared to Al. After New Years I went to see the World Heritage site, Halong Bay and see my brother teaching before flying back to Hong Kong. 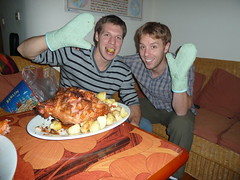 It was great to see and be with my brother during Christmas. Sadly though Hanoi did lack the Christmas spirit/feel you get in western Europe. Over the years Christmas has become less special to me. Being in Hanoi though made me realise how much I valued it. The cold weather, Christmas lights, seeing friends & family, cheesy music, shopping, whiskey, presents, and all the amazing food that gets eaten. The sum of which makes a real Christmas for me. In Hanoi we did manage a reasonable Christmas dinner and some whiskey, although did forgo giving presents. Given Hanoi is very hot most of the year, the houses often don't have heaters. So the cosy/warm Christmas feel in the living room is missing. Still it was a far better Christmas than I could have asked for given the alternative was spending it alone in China or India. Given the Christmas Day parties weren't quite as we expected we bought Monopoly and Risk and spent all of boxing day at home playing them.

For Christmas Eve we were out drinking until the early hours. It's quite common to go out on bikes in Hanoi and drive home drunk. I decided not to take the Honda out (given I'm slower than Al, and still a bit nervy), so rode on the back of Niall's bike while Jingwen went with my brother. At around 0400 I decided to call it a night and took a taxi home (Jingwen came too). The next morning I woke up at 1000 to the noise of my brother coming into the room. He and Niall had been in a crash. Luckily both were relatively ok despite going at around 50kph. They had both come off their bikes, Al just had bruising and some grazing whereas Niall ended up with a broken collar bone. Given it happened at 0800 on Christmas Day, in Hanoi that was a normal work day for most people. The police were quickly on the scene and the Vietnamese guy they both crashed into had to be paid off as did the police (2.5million VND and 750k VND respectively). The pay-off covered medical costs and loss of earnings while the police needed to be paid to get Niall's passport back (which they were given upon request). In Vietnam the foreigner is usually deemed at fault as most won't have an official Vietnamese driving license. In many ways the chaos of the traffic does work in Hanoi but when it doesn't it often goes horribly wrong. In this case, the Vietnamese guy had ridden across the road without checking what was coming. In Vietnam though this is common and generally the onus is on the on-coming traffic to avoid them (insane!). One day we arrived at a crash scene where a motorbike had gone through the doors of the side of a bus (as it crossed a junction). The bikers helmet was visible inside the bus!

We started the night by visiting a fellow expat's (Stu) house for a few drinks and food. For a country that doesn't celebrate the new year (by the [wiki]Gregorian calendar[/wiki]) there were plenty of Vietnamese out. The traffic was insane, I struggled to get out of second gear on the Honda as it was gridlock most of the way into town from Kim Ma. After staying at Stu's for a few hours we ventured out into the main square by the opera house. All the nearby streets had been closed to traffic so the area was filled with thousands of people. On the roundabout in the centre was a large stage with a tower and DJ at the top. They played some great music building up to the new year but a minute before it was cut for an alternate (and quite poor) version of Imagine (John Lennon) performed by [wiki]The Asteroids Galaxy Tour[/wiki]. It didn't work very well and killed the mood a little but not for long as the count down (done in Vietnamese) was great fun. The night went very well with no violence or idiots whatsoever (a common occurrence in the UK). At about 1220 though the police moved in to impose curfew and clear the area. The locals all disappeared off home while the expat's went in search of the next bar, Tracks which was based on the highway towards Fuk Tan. I returned home at 0300 whereas Al got back nearer 0700! 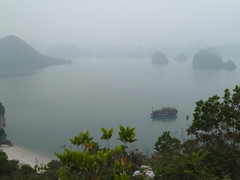 I finally booked up a tour to Halong bay although was largely disappointed. In retrospect I should have looked for a more adventurous tour, or tried to get to the islands nearer the Chinese border myself. Virtually all of the tours follow a similar route and end up in the same area. Standing on our junk boat I could count half a dozen other junk boats doing a very similar tour.

Because of this the area is quite polluted in terms of petrol on the surface of the water, and litter floating around. There is what I assume is a fake beach, and some of the islands have been over developed (a prime example being the "surprising" cave which I thought was amazing yet ruined). It was still a beautiful site to see, but Yangshuo still remains my favourite place for seeing limestone rock formations due to the freedom you have to explore them (by bicycle or motorbike). In Halong bay you really need your own boat to explore the islands properly.

On our cruise they over charged everyone for drinks yet most people were sharp enough to spot it. As a tip, keep an eye on what you sign for, and what the total bill comes out as. The best thing to do, is tell them it is wrong and to correct it or you won't pay. Keep rejecting it until they have got it right. They often know what is wrong.

On my last full day in Vietnam I joined my brother to sit in on teaching a few of his classes. The children were around 8-12 years old so in the early years of learning English. For each class Al would introduce me and get some of the children to ask me my name, age, what I like doing etc... Upon seeing a new guest (and knowing I was Al's brother) many of the children were desperate to be the one to ask the questions, arms stretched out repeating the typical "me, me, me".

I spent most of the lessons sat at the back of the class, although Al would get me to participate. To keep the lessons enjoyable Al plays a points game often between the boys and girls. He asks them a question and they have to respond in English. If they get it right (which with some help they always do) then they get to play a game. Either slap the board (one person from each team, I then say a word written on the board and the first person to put their hand on it gets the point), rock-paper-scissors (against me) or throw the ball (at a dartboard-like scoring board). It worked very well at keeping the kids interested although they were constantly quite noisy (more than I could handle). It was a nice insight into teaching in Asia and a good experience to meet some of the locals in the form of teachers and children. Their English classes were certainly far more fun and effective than the boring French and German classes I had to endure at school. It maybe reflects why many British people (myself included) can, embarrassingly, only speak one language.

While I liked Vietnam, it's not my favourite country in east Asia although possibly because I'm a little Asia-weary having spent nearly 3 months in neighbouring China. Western China in my opinion still remains the best place to travel in east Asia. I also preferred Thailand, especially the deep south. Maybe if I ventured into the countryside more I might begin to develop a feel for Vietnam. But for now, it was a great experience, but not my favourite place in Asia. Seeing my brother, learning to ride a motorbike and experiencing the insane traffic in Hanoi were the highlights. There are many very friendly people there, but at the same time a lot of moody ones too. The mixture of French culture, language (ie they use the Roman alphabet) and architecture definitely gives it a unique twist (and might explain why so many moody people). As does all it's painful history. I would like to return to Vietnam to see more of it, but still have a long to-do list of other countries, so I'll just have to wait and see.