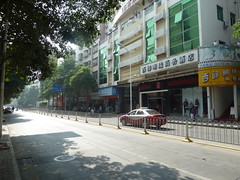 Having spent Christmas and the New Year with my brother in Vietnam, I flew back to Hong Kong and crossed into Shenzhen to be reunited with my bicycle for my final visit to China. I had a week before flying to Australia, so made the most of my time in Shenzhen (pronounced Shen-jen). Originally, I thought little of Shenzhen (it has a similar population to London) but now regard it as one of my favourite places in China and definitely somewhere I could see myself living. It represents the best in modern, fast-paced Chinese development while still retaining some heart and Chinese culture.

Everything You Could Ask For

Shenzhen has just about every facility you could ask for. A modern metro service. Plenty of buses circulating the city. Both incredibly cheap. Taxi's are as common as they are in Manhattan, and again fairly cheap. You have Hong Kong on your doorstep as well as Hong Kong airport. Shenzhen even has its own airport. There are half a dozen bus stations, the best of which is Futian. From there you can get to most parts of southern China (distances the equivalent of London to Glasgow) usually for £10-20. There are numerous shopping centres and parks, one of which is based on the sea-front. The roads are well maintained, and highways have plenty of lanes. There are cycle paths in many places and when there aren't you can ride in the road safely (I even went on the highway without a problem!). And to top it off all of the above is new, modern and clean.

Shenzhen is growing at a very fast pace. In the last two years the majority of its metro system opened, as well as numerous shopping centre's and housing developments. Everything is new and cutting edge. Everything is well thought out, especially parks and green areas. Along the sea front there is a huge park with amazingly clean toilets (go to a toilet in a UK park and you'll see why I mentioning toilets), cycle paths and ample parking. It puts to shame many parks in the UK in terms of the cleanliness and facilities offered. The shopping centres, while often expensive (even for a westerner) are pleasant to walk around gaping at all the overpriced products (mostly western) on sale. It's a stark contrast to much of China (from what I've seen) and in many ways something of a modern utopia, how development should be done. At the same time it still retains the feel of a Chinese city in terms of culture, food, shops, markets and the people that occupy them.

Being based in Shekou (pronouced Srrr-cow) was perfect for me. The Sky Pier (ferry service to Hong Kong airport) was 25 minutes walk away or a 10 minute cycle. As written previously, this was by far the best approach to an airport I've found with a bicycle (even without too!). Having used it to get to Thailand, Vietnam and now Australia the staff at the ferry port were beginninig to recognise me (so I got the occasional wave and "ni hao").

Shekou houses many of the westerners that come to Shenzhen. Around the Sea World development is a flurry of western restaurants and bars (including the obvious McDonald's and Subway). Prices are for the most part, identical to those back at home (in the UK). It was a modern, clean development though, great for walking around at night. It was also handy if I craved something other than noodles and rice.

As you move north from Sea World (nearer to where I was staying) it progressively becomes more Chinese. There are plenty of shops for buying cheap fake trainers and clothing. Arguably the best I've found on my whole trip in terms of quality and price. My favourite shop didn't appear to have a name, just a sign saying "We Sell Big Shoe". The girls inside were very sweet and you could bargain with them in a pleasant manor (in many places haggling often turns quite nasty). I bought some fake Diesel and Adidas trainers for £20 (and a couple of pairs of socks thrown in). At £10 a pair of trainers, I couldn't care less that they were fake. They look good and work well, ideal for my trip. Sadly they didn't do flip-flops so my "Toommy Hilfiger" flip-flops would have to last!

What I liked most in parts of Shenzhen was that on many nights people would pull out loads of plastic tables and chairs (from God knows where) and all sit out eating together. Dozens of people, and not just one street, all over the place. A cultural difference. They don't go to bars and pubs to eat and drink. They sit outside drinking and ordering food from the shops along the road. Just observing it was fun, as it gives a closeness to the community, all socialising together, something we lost a long time ago in the UK.

There are also dances events dotted around the place. Someone brings the speakers and music, and thirty couples (or so) will start dancing outside. The Chinese music did sound a little cheesy at times, but everyone was having fun. It certainly got my foot tapping although I didn't have the balls to join in.

The metro in Shenzhen is one of the most modern I've been on. It's very similar to the metro in Singapore... big, open spaces, and surprisingly clean (the Chinese are normally awful at using bins). On tv's around the station they play video's showing role-model behaviour, letting people off the train first, putting litter in bins, giving up your seat etc... In many way it seems to be working (maybe they should employ a similar tactic in Shanghai!). Not everyone follows the examples (Tokyo still has the most polite transport system), but it's an improvement over most of China. One thing they have got right and we constantly get wrong in the UK is that eating and drinking is forbidden anywhere in the stations and trains. Oh, and the seats on the trains aren't covered in cloth (what is our fascination with putting carpet on everything!). On the London Underground you're constantly reminded of its failings. Half finished KFC's on the seats, empty beer cans rolling around (why do people think the tube is an inviting place to drink? Can they not wait?) and dirty stained seats. It's the mentality of the people using the system and it needs to be changed. If Shenzhen metro can change some of the worse Chinese habits, then why can't we do the same?