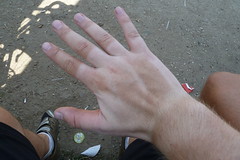 I finally began to run low on funds and in doing so decided to book a flight to Perth to see my good friend Gdog (Gareth). I could easily stay on in Asia (given the expense of going to Australia), but the trip was all about cycling to see my buddy prior to his wedding in 2012. I didn't quite achieve the 13,000km I set out to do finishing short at around 9,300km (I may add another 500km in Australia). The missing 3,700km is due to me not going to India. While, by my original plans, I had enough money to go to India, I of course changed my plans along the way. The three weeks in Japan were not planned (it was expensive), nor was the one month in Vietnam to see my brother during Christmas and the New Year. Both of those effectively burned my budget for India. In a way though I'm sort of glad...

Physically I'm still in good shape in terms of cycling (I got a bit of a shock and plenty of muscle burn when playing football and going climbing in Vietnam). I can quite happily jump on the bike and cycle 150km, so it's not the body that it tired... it's the mind.

Four and a half months in Asia has been an enjoyable but draining experience. My mind is exhausted from the constant planning (where to next, what route, where do I stay, how do I fix the bike, can I take my bike on the flight, how do I eat 6,000 calories when I'm sick of rice etc...). For periods of the trip (Yunnan in China, and parts of the deep south of Thailand) I started to cycle purely to rack up miles. It wasn't enjoyable, especially in the heat (or lack of in Yunnan).

The bike is tired too. Given my recent problems with the bike and troubles I've had in finding replacements, India would not have been a good place to go. Of all the countries it's the worst for finding 28" wheeled bike replacement parts. Serves me right for not buying a 26" wheeled bike.

So while I would love to see India, it's probably a good thing I'm not during this trip. To fully appreciated and handle India I think I need as much energy and focus as possible, which I'm currently lacking. Otherwise it's money not well spent.

Here is a collection of my favourite photos, in chronological order, during the trip.