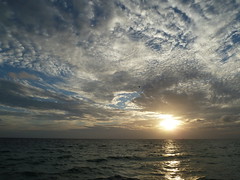 I finally arrived in Australia, something I had been longing to do for quite a few weeks. Upon arriving though I had mixed emotions. Firstly the relief of completing my trip and being amazed at how far I had come. Also relief in seeing a good and familiar friend once again (in the form of Gdog). But with the relief came a kind of sadness. The realisation that my trip was nearly over. Also the loss of many memories when I think back. The cycling was a rich and draining experience, so by constantly absorbing new things it has meant earlier memories have already been archived deep away (that my brain decides to serve up at random). 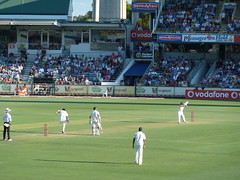 For my first week in Perth, Gdog took time off work. I arrived in Perth at 0600 and while still jet-lagged, we did a trip to the beach, followed by Hilaries and plenty of beers and games of pool (where I also met another old friend, Ol' Man Lambert). To top the first day, on the second day, Gdog and I went to see Australia vs India at the WACA in the test cricket. Gdog and his work can kindly been able to get me a hospitality ticket to the match, which meant free beer and food all day! We were even snuck into a more lucrative hospitality area towards the end. Unfortunately, India were pretty woeful and Tendulkar didn't even get close to his 100th test century. We returned home later that evening...very drunk.

The rest of the week we typically did a daily visit to the beach, jump in Pete's (Gdog's to-be father in law) pool, then go home. The evenings were spent drinking more than we should have and during the day we visited the shops, or a decent pub for lunch. We even spent a day with axe's and saw's cutting out a massive hedge in Gdog's front garden. 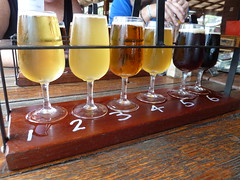 Once Gdog had gone back to work, Perth experienced its hottest heatwave in 50 years. For over a week temperatures were 40+C, topping out at around 43C on Australia day. Far too hot for me (to get out, let alone cycle in), so days were spent lounging around the house most of the day sat near the air-con. I did trying cycling one day but by 1000 it had reached 37C so I turned back after 20km.

I wasn't alone during the day though. I became the "manny" (male nanny) for Bodington, Gareth and Bianca's black Labrador. Days were spent trying to train him and teach him response words such as "football" and "Arsenal". 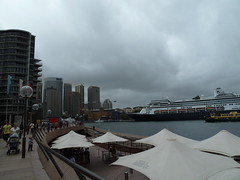 After a couple of weeks in Perth I decided to fly to Sydney to see Simon who I used to work with at the BBC. I really enjoyed my time in Sydney. At 4.5 million people it's a nicely sized city, not too big, not too small. It's also far more ethnically diverse than I had expected. In fact probably more so than London. I got a bit of a shock when getting off the train at Central. Walking around it seemed that 50% of the people passing me by were either Chinese or Japanese. This was reflected in the huge amount of noodle bars, sushi bars etc... dotted around. And many of the people I passed spoke in their native tongue. It felt like a true multi-cultural city with all my favourite bits of Asia included. Naturally I spent many days in noodle/rice bars ordering in my best Chinese or Japanese. Between George Street and Sussex Street became my hangout for most of my time in Sydney. 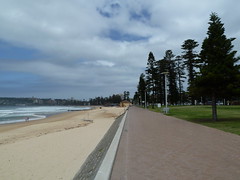 Half my time in Sydney was spent staying in a hostel around Central, while the other half was spent in Manly at Simon's (Freshwater to be exact, ie the next bay going northwards). Manly was a town in itself, and reminded me more of being on a beach holiday than in a suburb of a city.

The beaches were packed in comparison to Perth and the huge amount of Asian people I had seen in the city were no longer around. The surf was good although a little overwhelming at times. The number of people on each wave (body surfing) was a lot, so I had to duck every wave to avoid the chance of a collision. Also on one of the days we were out, there was a very strong rip tide. Jetski's and life boats whizzed around towing people out of the rip. I managed to swim out, although was quite exhausted by the end of it.

The nights out in Manly were good fun. The Wharf and notably the Wharf Bar were great hangouts, especially on a Sunday. 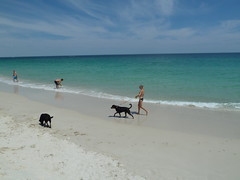 Having by now spent the majority of my budget in Australia I flew back to Perth for a final couple of weeks before flying home. I managed a couple of days cycling down from Ocean Reef passed Hilaries, not clocking up more than 30km each time. Pete also had his 60th due a few days before I was set to fly home, so I spent time helping him organise his house as the venue for the party. It ended up being a great night although we only got through 7 of 13 crates of beer (much to Gdog's delight).

I landed at midday on February 22nd, 245 days after I had left the UK, and fractionally under 10,000km in cycling. Welcomed by a 14C high (a 23C drop from Perth) and overcast, grey day it was actually quite depressing to be home. Heathrow was the second worst airport (Perth being the worst) I experienced on my trip. It doesn't provide much of a welcome to the UK. I was picked up by my dad outside Terminal 3 so didn't have far to waddle with all my luggage. It was followed by a journey around the north circular towards home. All of a sudden my trip seemed too short and already distant.