One year after cycle touring in Thailand I decided to return to one of the favourite parts of my entire trip, Krabi. I flew from Kuala Lumpur into Krabi airport so I could get the 30 day landing permit (rather than going via land which gives only 14 days). I arrived at the end of November and stayed until the second week in December, so was there during the start of peak season.

One of my favourite places in Krabi is the town itself. It doesn't have any beaches or flashy resorts. It's just a typical dusty Thai town, not terribly attractive, but laid back, good prices and largely free of the two main types of tourist I like to avoid in Thailand; a) resort tourists with stacks of wheelie luggage in budgie smugglers; b) young, drunken "backpackers" who get a life defining tattoo in Thailand that bears no real meaning.

Krabi Town has plenty of decent restaurants around the Pak Up Hostel area. The hostel makes a nice social epicentre, has lovely staff and a roof bar (on the 4th floor). Just up the road from it is Fubar, which is effectively just a bar in someone's back garden except done with real reggae character (it has a pool table, and sort-of tree house complete with hammocks). Even further up the road is the Joy Bar, another reggae bar (what is it with reggae in Thailand?) with live music, pool table and a generally buzzing atmosphere (great for later in the night).

While in Krabi Town I visited Rai Lei beach again, a touristy, but nice bay to visit. The longboat from Krabi Town is £3 (150BHT, a fixed, standard price so you can't bargain) and takes around 40 minutes. A full day can easily be spent there. 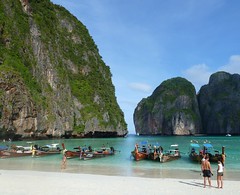 Having skipped Phi Phi during my last trip, this time I decided I couldn't miss out on seeing it. The ferry across from Krabi was £6 including pick-up (300BHT, a standard price). I stayed at the Phi Phi Relax resort to escape the tourists and stay at somewhere with a bit of charm. It came recommended by Travel Fish and lived up to their review (described as the best place on Phi Phi). One of the more basic huts was around £35 (1800BHT) a night but it was worth it. It has one of the best beaches on Phi Phi and some of the best snorkelling no more than 15m from the beach. The food is good (although slightly marked up) and they provide day trip services and activities to keep you occupied during your stay. I spent around £20 (1000BHT) a day on food and activities, generally eating and doing all I wanted, so it was pretty good value.

I did a half-day trip around Phi Phi Leh (seeing Maya Bay) for £14 (700BHT) which I'm glad I've done, but didn't really find it to be anything special. The islands further south (nearer Trang) offer a better and less crowded experience. The highlight was definitely Phi Phi Relax, 3 nights there was about right. 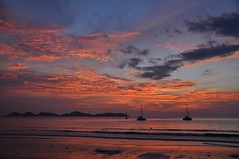 I took a 3 hour high-speed ferry from Phi Phi to Koh Mook. TigerLine were the only ferry operator available and the cost, £30 (1500BHT) felt a bit high, but upon checking out the distance travelled it didn't seem so bad. Be aware you will get charged a little more, 50BHT in my case, for a longboat to take you from the ferry to Charlie beach (as the ferry doesn't stop at the pier). A speed boat costs double and takes 1.5 hours.

I had spent a couple of days around Koh Mook and the surrounding islands before so was familiar with the area. I stayed on Charlie Beach at the Rubber Tree Resort (a little inland behind Charlie resort). It offers basic, but pretty standard huts. They're by no means luxurious but perfectly livable for a few days. There's a nice restaurant at the entrance of Rubber Tree Resort, called Mayow, that does good food (prices are one of the cheapest I've found). Again (like in Krabi Town) it has a reggae/rasta feel to it. There's also one of my favourite restaurants in Thailand. It's even further inland (a good 10 minutes walking so take a torch) along a currently being concreted over, dirt track (shame as the bumps and mud make the bike taxi rides quite exciting). The Hilltop Restaurant (with slogan, "cheap cheap but different") offers fresh, extremely tasty food at very low prices (50-80BHT for most mains). You also get plenty of entertainment from the hostess who cooks everything and has her reluctant children help serve. If you stay late she enjoys a chat once she's finished working. In my case I was told upon going to pay, "not want money yet, I chat first". She's the sort of woman you listen to.

It's also worth staying a night or two in Koh Mook just for the sunset on Charlie beach (usually more dramatic than on places like Koh Lanta) and to see the Emerald cave. It means you can visit the cave during the quieter, if empty, hours. Otherwise it means doing a day trip from somewhere like Koh Lanta along with 60-100 other Germans (typically) and paying a 100/200BHT entrance fee by the park rangers. It's not a huge cave so any more than 15 people and it begins to feel crowded. Being on Koh Mook also means you can visit the other nearby islands quickly and easily. If you're feeling more adventurous Koh Rok is about a 2.5 hour longboat ride away. I went in my previous visit and it was worth it as the snorkelling is very good (the coral is actually alive unlike many places in Thailand). 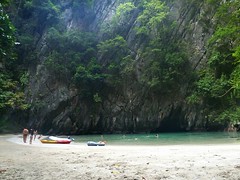 You can hire a kayak at Charlie beach resort for 150BHT an hour. You kayak to the right side of Charlie beach, following the coast around. It takes roughly 25 minutes to reach the cave. To avoid the park rangers, who won't let kayaks into the cave, reach the cave before 8am, or any time after 3pm. Otherwise you'll be left tired and disappointed, as I was first time round.

It's worth checking about tides, but I'm fairly certain I kayaked in during high tide and it wasn't a problem. Just make sure you take a torch. Getting in is far harder than getting out as it's harder to see the light at the other end (as there's less light in the cave than the outside ocean!). In general though kayaking through the cave isn't terribly hard, nor dangerous (given the conditions aren't nasty outside). The darkness can be a bit of a shock at first though, but it's well worth it.

The best time to go is in the morning as at some point the sun will be directly over the cave (it's an open top cave) so will light up the water. But if you want a private visit it's often empty after 4pm (at least it was in my case). You then get to kayak back to Charlie beach during sunset. 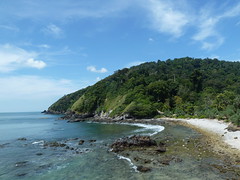 For a decent mix of tourism and activities, Koh Lanta is spot on. I cycled to it from Krabi Town on my previous trip, and it's since become my favourite island. To get the most out of Koh Lanta you need to hire a scooter. This isn't a problem under a British license, in fact you'll just need your passport. Be aware though that you won't be covered for liability (a British drivers license only covers up to 50cc engines, and most you rent are 100-125cc). So if there is a crash and the police turn up, you could be in for a bit of cost/trouble.

That said, I've rented a scooter twice in Koh Lanta, driven fairly safely and never had even a small scare. If you rent a bike for 2 days (it's usually 300BHT a day) you can see the national park (100BHT entrance fee) at the southern tip, and also the eastern side of Koh Lanta without rushing. For a decent day's riding you'll need 2 bottles of gasoline (one litre each) which will cost 40-50BHT each. They can be bought all along the roadside.

On the east side, the old town isn't anything special but worth riding through. The best thing about riding is finding the numerous cliff-side bars, bay views, secluded beaches and to see the landscape in general. Or if you enjoy riding, the winding, up-and-down road to the national park is a . Aside from the bike, Koh Lanta is great for chilling out in front of the beach late in the evening drinking beers and cocktails.