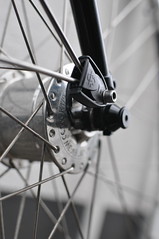 Being a sucker for a clean bike set up, I had always wanted to improve how my dynamo hub on my touring bike was hooked up. Originally on my Genesis I had the cable running down the outside of the fork, held on with zip ties. While it worked fairly well, the zip ties looked ugly and the cable housing was exposed to the elements (causing the rubber casing to harden and start to perish). I finally found the time to try and improve the wiring on my newer tourer, my Soma Double Cross. The vent holes in the fork provide a perfect route for the cable so that the majority of it is hidden safely inside the fork, away from the elements and things for it to get snagged on. It is however, incredibly difficult to pass the wire through! So firstly, if you're going to attempt to do so, you need a lot of patience. Here's how I did it.