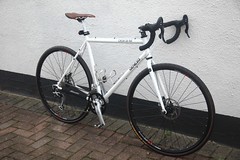 Having returned from a 245 day tour taking me from London to Perth (actually Singapore, then flying on to Perth) my bike was in need of a rebuild. Given I had a 50/34T compact chainset and 11-28T cassette the gears had been worked hard when climbing steep hills. Towards the end of the trip the teeth were starting to "shark fin" and I was getting chain-slip. The chain was also, upon measuring, stretched way beyond the recommended length. The bar tape was sliding all over the place and STI shifters had taken quite a few knocks. When I was in Thailand over 3 months ago, I got an urge to shop so bought all of the parts for rebuilding the bike while I was still touring. It was mainly to have them sat and waiting rather than buy them out of the left over budget (of which there wasn't any!). I also got them during a ChainReactionCycles voucher offer, so saved a fair amount too. I wrote a quick post detailing the changes I would make to my Croix De Fer. Since then I have returned home and my bike is sat contently having been completely rebuilt. Here's what I did... 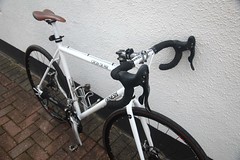 I did opt for a slight colour scheme (black and white) although there are parts that could have done with being matched better. The stock saddle is back on (for commutes, I prefer to save my Brooks for better challenges) for the time being. It's not a terribly good saddle (Genesis take note! I'm the the only one saying so), so once it's had some use, I'll replace it with a better black saddle. The chainset was an ordering blip, I did mean to order the black Deore chainset. Also with the rear mech I could have opted for a cheaper and all black SLX mech over my partially grey XT one. That just leaves the grey stem (which is fine and I'll keep, but would be nice if it were white), and the silver bottle cages (again white would have been nice). The outer cables (cable housing) are all white which works very well as it makes them almost invisible, camouflaged against the white of the frame. The brown bar tape has gone (mine wasn't wrapped very well...Evans, *sigh*) and been replaced by black Pro Gel bar tape (nice and squishy). 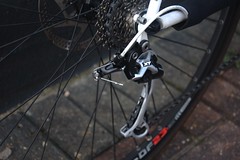 One of the first mistakes Genesis made was fitting a short-cage 105 road mech and 11-25T (now 11-28T on the 2012 version) cassette. For muddy trails and touring steep hills there simply aren't enough easy gears. As a comparison my Boardman Carbon Pro had an 11-25T cassette and an SRAM rear mech of similar length. This applied to the front too (both bikes using a 34/50T compact chainset). How can a heavier, steel cycle-cross bike require similar gear ratios to that of a road-racing carbon fibre bike? And yet with the 2012 Croix De Fer released, Genesis continue to make the same mistake, albeit with a slight correction by using an 11-28 cassette.

Solution - a Shimano SLX 11-32 cassette and Shimano SLX long-cage rear mech. Shimano road and mtb rear mechs both use the same pull ratios (although possibly not 10sp), so running an mtb rear mech with a set of STI shifters wouldn't be a problem. The set up would add a little more weight, but give a much more suitable set of gear ratios. A simple change that adds a lot of value and only a fraction more cost.

As mentioned 34/50T compact chainsets are more commonly being found on road bikes, for example my Boardman Carbon Pro. It's not very suitable for a cyclo-cross or touring though, as the 34T chainring doesn't offer low enough ratios. A 16 teeth difference is quite a lot between changes, and while the 34T small chainring is good, it's still a few too many teeth for my liking so you often find yourself in between chainrings.

Some people seem to quite like the Continental Cyclocross Race that come with the Croix De Fer, but I found them fairly poor. Going off on my first trail I had a puncture within 30 minutes. As a pure trail tyre, they aren't too bad, but as a general use tyre I didn't rate them. It would be nice if there was a "road" option of tyre you could opt for when buying the bike. Anyway, I placed a set of Continental Gator Skins (25C) on my Croix De Fer for riding around on. Weighing only 330g each they're not only light and fairly grippy but offer a reasonable amount of puncture protection. For touring I still opt for a larger 28-32C tyre, usually a Schwalbe Marathon.

Still not entirely happy with the Tiagra STI's and all of the above, I decided to go for a Shimergo set up.

The Tiagra shifters are great and work very well, but by wanting to switch to a triple chainset, it would mean replacing the left double shifter for a triple one. The downside to Shimano shifters (apart from not being able to dismantle them for maintenance) is their cost. At £75 per Tiagra shifter (£150 for a pair) they aren't cheap for what is an entry level shifter. Also the cable routing isn't very clean with the gear cables coming out of the sides of the shifters and across, in front of the handlebar area. This has been changed in the newer 10-speed Shimano shifters, but you end up paying even more for them! 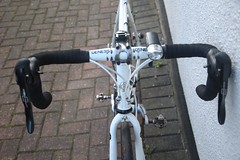 I bought a pair of Campagnolo 2011 10-speed Centaur Ergo shifters (the Powershift type). They were fairly easy to fit and install once you find a decent guide. Mine worked out £30 cheaper than a set of Tiagra's but a few models up in terms of Campagnolo's range.

I paired them with a Shimano XT Shadow M772 rear mech and a Shimano Deore M591 front mech. I did originally try a Shimano Tiagra 4503 front mech, but the tension of the spring in the mech was too strong for the shifters making for very stiff shifts up, and sharp ghost shifts down. This is because road front mechs require less pull and hence have a stronger tension (presumably for quick shifting). I didn't want to damage my lovely Ergo-shifters hence switching to a Deore front mech. The Deore front mech also sticks (as in chainline) out slightly wider (than the Tiagra) making it a perfect match for the Deore chainset (as MTB chainsets sit wider than road chainsets).

So far, I've avoided using a JTek Shiftmate due to the additional cost. On my rear mech I've used a hubbub approach (as shown in this photo) and get almost perfect shifting. Every gear is indexed just about perfectly, although on occasion it does take a fraction longer to shift/locate than I would like. It's mainly when shifting down quickly and putting the power down (I like to "burn" off at the traffic lights). In general though it works very well. 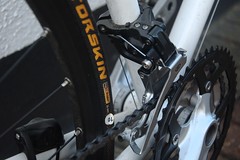 The front mech is a lot harder to set up than the rear mech, and often where compatibility is questionable (or has been more so recently). I decided on a Shimano Deore M591 front mech and installed it as you normally would (no hubbub method). The trick is to ensure all the slack has been taken up (so the cable is taught) before clamping the cable. I found mounting it a little lower than it needs to be, clamping the cable as best I can, then wiggling the mech up into it's ideal location, (which pulls the cable that little bit tighter) works very well. I have since ordered some cable adjusters (see below) to help with this.

Annoyingly you have to remove the chain to fit the Deore mech (as it has a sealed cage). I had already screwed in the master pin for the chain, so decided to remove it, and another link and replace it with a Powerlink. I don't know why I didn't do this before. The bike runs perfectly and I can now take of my chain completely for cleaning with relative ease.

Using a set of Powershift Ergo shifters (which I am) means around 4-5 clicks to go from the smallest chainring to the largest. This may sound like a horrible set up, but it actually works very well. Here's how mine is indexed:

It means that if ever the chain starts to rub on the front mech cage, I can just index/trim it by going up or down a click. I've highlighted the clicks I am most likely to use. 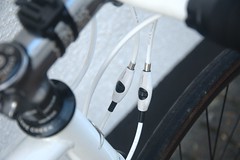 As the new gear cables stretch in, and to make general fine adjustments I ordered a pair of Jagwire J2 in-line cable adjusters. They're compatible with Campagnolo outer cables and means I won't have to fiddle around with the clamped cable to adjust the shifting. Last thing on tour that I want is a frayed cable where I've been messing around with it. I've mounted mine on the cable outers near the headset, meaning I can tweak my gears while riding. Very helpful when I'm away from my bike work-stand.

To keep things cheap, I found Clark's Universal brake and gear cables work perfectly with the Ergo-shifters. Given I have disc brakes the cable needs to run that bit further, but it's not a problem with the Clark's cables as they have plenty of length in them. For housing I bought a couple of metres of Goodridge Brake Cable Outers and managed to source some Campagnolo Gear Cable Outers. The Goodridge stuff is cheap, but it's definitely quite stiff, certainly had a mind of it's own when trying to tape it to the handlebars.

The only other upgrade I would consider are my brakes. I'm still very happy with the Shimano BR-R505's, but I would prefer a set of Avid Juicy B7's. But not at the cost of the upgrade, it would be something I change should my brakes one day give in. Genesis have already clocked onto this and the 2012 Croix De Fer ships with B7's. While I liked the original Croix De Fer, I think my one not only looks better but is better suited as a Cyclo-cross and touring bike, while still being perfectly comfortable as a fast road bike. It covers all the bases very well. It's only threat is my current desire to get a custom built Mercian Reynolds 853 or 953 frame!