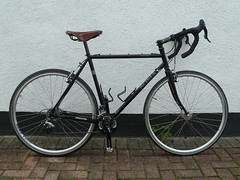 Touring for 10 months across three continents you learn a lot about yourself and your equipment. For my tour I bought an off-the-peg Genesis Croix De Fer 2011. It's been a great bike although it does have it's shortcomings (which I naively didn't realise upon buying it). Once I returned from the tour I couldn't bring myself to sell the bike given how far it had taken me. so decided to re-spec it with a more suitable Shimergo set up. The re-spec went very well and I'm much happier with the bike, although still not entirely content. Now that I'm earning again I've decided to build a lightweight steel tourer the way I think it should be. My Croix De Fer will still be used for touring, but will typically become an all-weather and commuting bike.

Firstly, I had to think about what I wanted and expected from the bike. My requirements were fairly simple:

With the above in mind I set about searching for the ideal frame and components.

I had settled on steel (all of my bikes currently are) as it's strong, gives a good ride and can take a bashing. This however comes at the cost of it being heavier than other materials. I ideally wanted downtube braze-ons as well so that I have the option to use downtube shifters should I wish. Here are the contenders I found (the weights are approximate from googling): 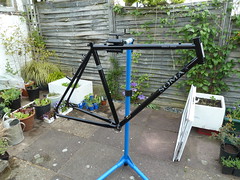 The Surly Cross Check, Planet X Kaffenback and Thorn Audax are fairly similar in terms of build quality and weight, being 4130 Chromoly (or thereabouts). Of the three, the Kaffenback would be my favourite purely because of it's price and versatility. The Soma Double Cross was the lightest off-the-peg steel frame I could find. It comes in a disc version that also had cantilever mounts which is very useful for future upgrades.

I've always liked the Spa Titanium bikes but they're a bit out of my price range, and the tourer is actually quite heavy. The Audax would have been my bike of choice, but it's quite a fast bike and not as versatile as I'd like. A custom build Mercian with a Reynolds 853 frame would be perfect, but it's far too expensive for me at the moment.

So, In the end I decided on the Soma Double Cross (the Kaffenback came in second). The Double Cross is very light for a steel frame and gets great reviews. It's also very versatile, with good tyre clearance, downtube braze-ons and both disc and cantilever mounts. As a comparison, the Croix De Fer frame (from what I've read) weighs around 2.2kg (300 grams heavier), but lacks downtube braze-ons and cantilever mounts.

* Annoyingly, upon getting my Double Cross frame, on the kitchen scales it weighs 2140g which is 220g heavier than listed. That may not sound like a lot, but it's the equivalent weight of a decent cassette!

Due to problems with stock and the £100 price tag for a set of Soma Double Cross forks, I decided instead to get a set of Surly Long Haul Trucker forks. The length of the fork is only 5mm more than the Double Cross's forks, and the rake 1mm more. So very similar, and perfectly suitable for my Double Cross. It also saved me £50 and gave me more mounting options on the front forks.

By picking the Surly Long Haul Trucker forks, I had decided to go with rim brakes over disc brakes. They are cheaper, lighter, the fork more comfortable to ride on (over a disc fork), and provide all the braking power I need. The forks weighed just over a kilo uncut, and once I had cut the steerer were around 980g.

I have a Deore 26/36/48T triple on my Croix De Fer, but it is quite heavy at over 1kg. For my new build I decided to opt for a Shimano XT 28/40T 10-speed double chainset. This would offer me all the gear ratios I need, while saving me around 300g, and reducing the complexity of the bike by one chain ring.

To compliment it, I got an Shimano SLX 9-speed front mech (good value to weight), used an existing Shimano 105 9-speed rear mech (very light) and a Shimano Ultegra 12-27T 9-speed cassette (very light at 220g). I had wanted a 105 11-28T cassette, but couldn't find them available at the right price. The Ultegra will work fine, and save me some weight.

Sticking with 9-speed was important for compatibility (also with my other bike) and powerlinks as I like to fit an SRAM powerlink's on my chains.

I did have my heart set on downtube shifters with Tektro RL520 brake levers, which would have allowed me to use full size v-brakes (I was looking at the BR770 XT v-brakes). The total weight of the two is 77g + 272g, at a cost of around £75. After some thought and a price drop, I decided to go for a set of Campagnolo Centaur Ergoshifters (which I have on my Croix De Fer). They are comfortable, work well, at 375g are very light and at £116 very affordable (I got them on discount).

The shifters determined that I would either have to go for cantilever brakes or mini v-brakes. The Tektro CR720's and Tektro RX5's were the two main contenders. Given Spa Cycles had recently switched their bikes to the RX5 mini v-brakes I decided to copy them! At £15 a pair they were good value and they are light. The only annoyance with them is that they cable really needs to be completely loosened in order to get the wheel off.

I already had a set of hand-built wheels courtesy of Spa Cycles, a pair of Rigida Snyper 36-spoke wheels, one of which has a SON28 dynamo. For speed I'll initially be running a set of Continental Gatorskins 25C on them. They also only weigh 330g which is very light for a fairly good puncture resistant tyre. 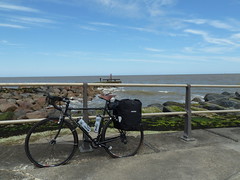 Once everything was on, and allowing for any missed little bits of weight, the bike weighs in at 10.3kg (with my road wheels on, race saddle, and rack removed) and 11.3kg in full touring trim. It's close to my target, but a little over. I had wanted a race trim of under 10kg, and a touring trim of under 11kg. This could easily be fixed by dropping the dynamo hub and switching the Brooks B17 for something lighter. The dynamo is something I definitely could last without, although I'm not sure about the Brooks, so the additional weight may be worth it. The Shimano XT Chainset is fantastic and so far has worked very well. The bike in general feels comfortable yet still very nippy when climbing.