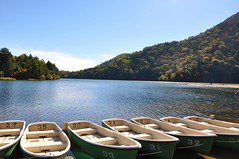 Around 150km north of Tokyo lies Nikko, a small town set around a series of mountains, lakes and hot springs. It's a popular destination with the Japanese who like to flock there during the Summer months when it's warm around the lakes, and also during late Autumn when the leaves begin to turn (as it creates a beautiful array of colours against the mountainous landscape).

I visited during high season in mid October just prior to high season. Some of the leaves at higher altitude had turned although many were still green. That didn't mean it wasn't busy, buses were packed, but shops and restaurants were mostly closed (especially after late afternoon).

I stayed at Nikkorisou, a small hostel about 20 minutes walk from the JR station up by Shinkyo bridge and easy walking distance to all the shrines. There was a 7Eleven 10 minutes north where I got most of my food (and cooked in the hostel) as in the evening virtually all restaurants were closed.

The hostel is what I would describe as a real travellers hostel. It's owned by and lived in by a lovely couple so has all the character and charm of a real home. They're very accommodating/friendly and the hostel has all the mod-cons one needs.

For the shrines you need around half a day. And for just the waterfalls and lakes further north another half a day. If you want to do any hiking or onsens (hot water pools) you'll need longer. The mountain hikes will typically take a day each unless you're a very early riser. I did two nights in Nikko which allowed me enough time to see the shrines, waterfalls, lakes and do plenty of hiking in between.

I won't detail too much about the shrines, but given they are a World Heritage site they're definitely worth visiting. Be prepared for quite a lot of people (typically tiny old couples who are very sweet/funny to watch, or secondary school trips). You also have to pay to enter a few shrines, so allow 3000Y to cover those costs.

If you're going to Nikko it's definitely worth seeing more than just the shrines. Around Lake Chuzenji and Lake Yunoko you can see examples of the beautiful landscapes hidden beyond the cities of Japan and what life is like in more rural areas.

To get around the most convenient and cheapest way is to buy a Tobu bus pass at the Tobu rail station (it's 2 minutes walk from the JR station). It costs 3000Y for two days for a pass that will cover you all the way to the furthest stop (Yumoto, around 80 minutes away).

Chuzenji is the first lake you come to as you drive up the mountains. The roads made me wish I had my bicycle as they weaved up the hillside with tighter bends and shorter straights than anything I've seen (especially at least anywhere in the European Alps). The tarmac is smooth and the road up and down are two different one-way roads. Chuzenji is an impressively large lake, but out of season, the surrounding area is a bit boring. For me the main thing it marked was the hike up the accompanying volcano, Mount Nantai, that had formed it. It's not a long hike in terms of distance but you ascend very quickly so it's very steep all the way up. The temperature noticeably drops off as you ascend too. My t-shirt, long sleeve merino top and 100g plastic-bag-thin jacket was cutting it a bit fine. Going down is also far harder than up!

On the way up to Lake Yunoko you can get off at Ryuzu Falls, to see what is a nice, but nothing hugely special, waterfall then begin hiking up to Lake Yunoko. It's an easy, mostly flat hike. You get to see plenty of Japanese countryside and more interestingly watch the Japanese people as they gawp and take close up photos of red and orange leaves. "Ooooohhh" is quiet a common sound you hear as they point things out to each other. It's a great people watching place. As you pass people they always bow and say "konichiwa".

Further along the hike you reach Yutaki Falls before climbing them to get to Lake Yunoko. There's a nice path worth walking around the lake. I didn't have time but there are a number of walks that can be done beyond Yumoto.