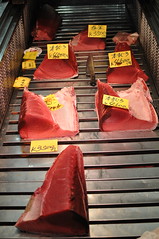 I was in Tokyo around a year ago for nearly a week but still wanted to return as there were plenty of things I had yet to do. I based myself in Asakusa again and this time had my activated JR Pass so had the freedom of using the JR network through Tokyo. My Pasmo card still worked too (the equivalent of the Oyster card in London) which made metro journeys far easier. My first day was spent travelling around some of my favourite parts of Tokyo. Starting in Asakusa I revisited the Sensoji shrine quickly before starting my day. First I stopped off at Akihabara, somewhere I hadn't been before. Most people will known it for Electric City, full of karaoke venues, arcades, and maids cafes. It wasn't quite what I expected, certainly not as impressive as I'd hoped (from what I read it's an area slowly dying off). I ended up returning on two more occasions, in the day to buy some new earphones and at night to go to an arcade and karaoke. Karaoke was fun, I went in a group of five. We paid 1760Y (around £15) an hour for a karaoke room (basically a room with sofa's, a big tv and loud speakers) where the drinks were free and unlimited. It took us a good 20 minutes to get started (figure out how to use the remote) and a few errors before we were singing away. An order of a jug of beer and 5 glasses turned out to be one glass and 5 jugs! We drank our money's worth.

I also returned to Shibuya to have another look around, although the crossing wasn't as impressive (compared to my last visit) as it was relatively quiet for Shibuya that afternoon. Shinjuku was somewhere I hadn't explored much so it was my final destination of the day. I went to the Tokyo Government Tower which has a free observatory, two in fact. The south tower closes around 5.30pm (so good for daytime views) whereas the north tower stays open until 11pm. You get an impressive 45th floor, 360 degree view of Tokyo all for free.

I woke up early (7am) one morning to make my way to the largest fish market in the world. It was fairly easy to get to by via metro. Once there you have an inner and outer market. During negotiations the general public aren't supposed to enter the inner market, as I found out after being chased down and shouted at. They were even less impressed when they found me in there a second time. At around 9am all the commercial purchasing finishes and the public are officially allowed in.

For a free attraction it's worth visiting. The sheer size (football pitches in size) and amount of daily fish brought in is staggering if a little worrying. You can see all manor of sea life there, some still alive in crates while others are in the process of being chopped up with 4ft knives (a sword basically) and electric ban saws. It wasn't as smelly as I had expected, covered shoes a definitely recommended though.

After you can find a food seller in the market area and buy some just-brought-in fresh sushi. I had some freshly cut tuna.

One of my days in Tokyo coincided with the Adachi fireworks, a large display that takes place at the river by Kita-senju. Around 500,000 people turn up to see 15,000 fireworks (more on this occasion to commemorate the tsunami victims). I went alone and didn't see many other gaijin. The display itself was good but not spectacular. That didn't stop the Japanese enjoying themselves. As usual there was lots of clapping and "awwwww", "ahhhhh" sounds when something special happened. They especially liked the fireworks that exploded in the shape of a red love heart... very Japanese! I found the people watching the best part of the night, couples squabbling over where to sit (the girl usually not happy), girls dressing up in kimonos and kids running around and falling over (with that look of shock on their face, unsure if they're supposed to cry or not). The walk down to the river was fun too as everyone, most of who were at my shoulder height, was squashed into a small road, shuffling their way towards the firework display.

For one of my nights in Tokyo I hired a gaming both. You can select the exact type of booth spec you want but in its simplest form it's a booth with a comfy chair, pc, unlimited drinks and snacks, and a selection of games to play and manga comics to read. People go there to play games all night or if they've missed the last train home, as a place of refuge. I got booted out at 6am and didn't really sleep while in the booth (although I did doze) so my body clock was all over the place. Still it was worth the experience.