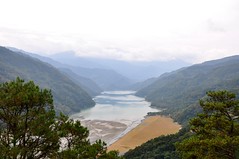 While travelling in Taiwan I had read about some of the great cycling available so decided to indulge myself. The north-cross highway was a good option but a bit of a pain due to its vicinity to heavily populated areas and the distance I would have to cycle in one day. Instead I chose to do the more famous middle-cross highway which contains the infamous Wuling Pass, a 2800m+ climb to around 3275m. My original thoughts were to cycle from Taichung to Hualian but this soon changed upon arriving in Taichung. 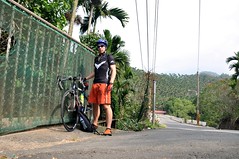 This didn't prove as easy as I thought it would. In Taichung I opted to stay at a new hostel (WoW Backpackers), situated near (actually above!) a Giant cycle store. I didn't realise it was out in Xitun district, so I was actually quite far out of the city centre (around 10km). It turned out to be a great choice though. I was the only person staying at WoW Backpackers hostel for the days I was there. The guys who owned it were great in helping me source all the bits I needed and acted as translators, even buying me lunch. The Giant store couldn't actually offer me much, so in the end the hostels guys sourced a bike for me, even providing a bike bag, helmet, multi-tool etc... All for 500TWD a day! It was a fairly light road racing bike with 23C tyres and very good components (Shimano 105 and Ultegra). I ended up purchasing some gloves (I've cycled without before and it's not pleasant over long distance) and a hostel cycling top (something to remember the attempt by) for 1500TWD. I didn't want to spend much more so was left with swim shorts (on a racing saddle, ouch) and Vibram Five Fingers (finger shoes). Not the most ideal kit, but it would do.

Getting Out Of Taichung

Taichung was hugely built up and given the time constraints I decided the cycle to Puli wasn't anything I'd miss. Instead I jumped on a bus to Puli. The bus station is outside the old train station (ie not the HSR). It's a bit hectic and people generally don't speak English, so knowing a little Mandarin helps. It takes around an hour, costing 125TWD and having a bagged bike wasn't a problem (they chuck it in the storage underneath the bus). I arrived at Puli, quickly checked in to the hostel and got out on the bike to cycle Sun Moon Lake. Route 131 is probably the best road to take from Puli, and is around 12km to the lake, then it's a further 35km around the lake. It's worth taking a GPS (or phone with cached Google Maps) to help navigate as it's easy to get lost. It was a fantastic warm up ride before attempting Wuling Pass the next day. 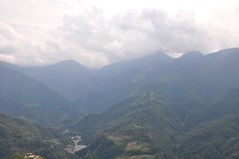 To put this cycle challenge into context, it starts at 450m and rises to 3250m, making it over 1000m higher than the highest Tour de France stage. That's a 2800m climb in a single day. Typically when cycling the Peak district or other places in the UK, the highest I've cycled to is around 600m and the longest, uninterrupted climb around 500m over a matter of 10km, no more. The largest total ascent I've done is 2250m during LEJOG when we passed over the Peak District. So it's an insane challenge, although the pro's manage to do it in around 3-4 hours! For the average person like myself it usually takes nearer 6-8 hours.

I woke up around 6am and was on my way by 7am. I wish I had started at 6am though, the early mornings are much cooler and more suitable for me to cycle in. The initial first stage heading towards Renai is fairly tame and one can pace up it at speed. The climb to Renai is where things begin to get harder. The road starts to bend and weave and the incline increases. Renai makes a nice stop for a break and there's a 7Eleven there. 700m climbed without any huge issues (current altitude 1150m). I reached Renai by 9am (2 hours). 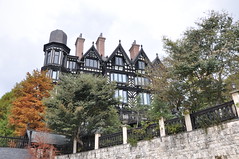 My next major rest stop was Ming Ching Farm at 2000m. It took me one hour to cycle the 6km to it from Renai, getting me there for 10:30am. This is where I began to tire a little and the reality of the challenge began to set in. Short breaks became more frequent as I could begin to feel the effects of altitude and my pace slowed. There are plenty of stop offs on the way, Family Marts and 7Elevens dotted all the way up and around Ming Ching Farm. It even sports an English building and clock tower hotel a little further on, which was probably the most random and unexpected thing I saw up the mountain. All parts are, I'm told, brought from England and it's typically a honeymoon destination and chance for many Taiwanese to experience England without having to go there (as not everyone can afford to).

At around 2500m (12:00pm) I began to get severe cramps in both legs and front and back muscles (quads and hamstring). The gearing on the bike I had rented didn't suit me nor the high cadence I like to pedal at. With a 34T inner chainset ring and 25T lowest cassette gear as my easiest gearing, my cadence was slowing meaning my muscles were straining more. This just increased the occurrence of the cramps. I had to get off and rest, taking on fluids and food and slowly stretch out my legs. Before starting cycling I walked for 1km to shake off my legs. It was also a nice change as the finger shoes were getting painful. I eventually began to recover and the cramps disappeared meaning I could push on. 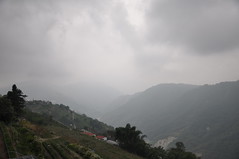 As I reached around 2600m rain clouds began to move in on the mountain. I stopped to take shelter for a bit but after 30 minutes I gave up waiting and decided to cycle on in the rain. By 2850m at Yuan Feng, the rain still hadn't stopped but by now the visibility was down to around 10m. The speed at which the conditions changed was incredibly quick. In Puli I had started of with just my cycle top on feeling more than comfortable in the heat. By 2850m I had my cycle top, merino top, and light jacket on and was still a little cold. I don't know the exact temperature but it would have been in the single digits Celsius. The light dimmed and I was left feeling cold and exposed to the lorries that chose to bomb along the roads without using their headlights. I also had slicks on my bike, so when standing to climb, the rear wheel would spin on the tarmac, a bit unnerving. I didn't know what to do other than to call it a day and head back down. I sat at the side of the road for about 10 minutes before, at 1:00pm, I started my descent. 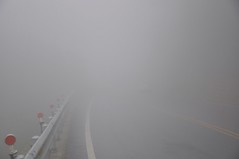 I stopped at the first 7Eleven I saw to dry off and ponder what could have been. I had finished 400m shy of the summit (although that would have taken me another hour and a half). But as I thought about it I became less bothered. I had ridden higher than ever before and by quite some way reaching 2850m, climbing 2400m (a new P.B). I had also climbed solidly for around 48km, taking me 6 hours (with plenty of breaks) and burning, at a guess, 5000 calories. I set off to enjoy the downhill ride home. At around 2 hours with some layer changes and breaks, it was also the longest downhill I've ever done and fairly technical.

It wasn't all pleasant, the rain and wet road surface put me on edge and the constant u-bends and turns with lorries either overtaking me or cutting onto my side of the road made it a little dangerous. I had to ride the brakes a lot but still went fast, overtaking quite a few cars cautiously making their way down. After Renai the incline and bends became fewer meaning I didn't have to brake as much. My race saddle and swimming shorts combo had left me in quite a lot of pain as having not cycled for a bit, I wasn't as conditioned in that area (so to speak) as much as I usually am. Also the finger shoes hadn't been too bad for climbing, but going downhill with my body weight on them and taking road impact, they really cause a lot of pain. They, and resting my bum, were the only real reason for having rest stops on the way down. 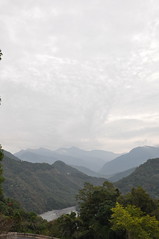 During the decent the rain worsened and the next morning it was pouring down, so the decision to descend rather than push on or stay somewhere in the mountains was a good one. I think I'd like to attempt it again, maybe when there are blue skies as the photos look fantastic. It's certainly one of the hardest days cycling I've ever done, so would be nice to complete. I'd also like to use my own bike. A better fit, easier gear ratios, comfy Brooks saddle, clip in shoes etc... would all make for an easier, less painful experience. I think I'd stay the night in the mountains too as having to get back down in the same day is a bit too much, no time to enjoy yourself. Taiwan definitely gives a good reason for me to get a hard case for my tourers as I could fly in leave the case somewhere while going off and exploring Taiwan.