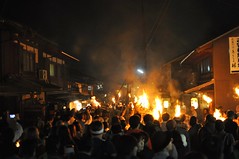 Kurama no hi Matsuri (as it's properly know) is held on October 22nd each year, in a small town, Kurama, an hour by train north of Kyoto. Thousands of people head there late afternoon until late at night to watch the locals of Kurama (children included) parade large torches (taimatsu, ie pine torches, 250 in total) around the streets before placing them at the temple Yuki-jinja. The festival reproduces the scene of receiving the deity in Kurama. I visited it in 2012 while I was staying in Kyoto, here are my thoughts...

Is It Worth Seeing? 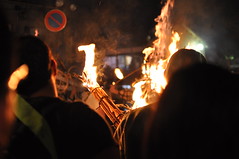 Yes definitely. If you've been to something like Ottery Saint Mary in Devon, UK then Kurama will be a less chaotic experience although lasts far longer. So don't expect anything too crazy, but go along, get involved and mix with the locals.

We went fairly late, getting the train at 17:00 and arriving in Kurama well after 18:00. Upon getting off the train you are constantly shuffled along behind tape and well clear of the torches by the police (the Japanese love being well organised). You shouldn't need to rush though as further along (just past the temple and up the hill) you can break free of the tape and wander around more freely. 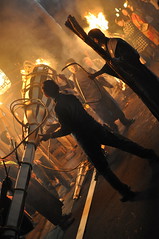 We got much closer to some of the larger torches that weigh 80+kg and require 3-4 guys to carry them. We sat outside the front of someone's house for a while and joked with the locals. After a while we decided to march down with one of the torches. You can often get almost to the temple before the police kick you back behind the tape. It's great fun, and we did it a few times. You can get right up close to the torches, feeling the heat coming off them. After 22:00 the crowds begin to go home, so you start to get a better experience.