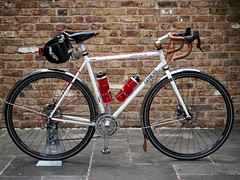 The SKS Chromoplastics 45mm have gone and been replaced with a set of Gilles Berthoud chrome fenders. I don't know the width, but at a guess they're 40-42mm as they'll just squeeze a set of 32c tyres under them. Here are the benefits: 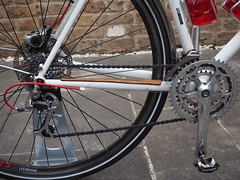 They're no easier or harder to fit, just a pain and time consuming like fitting any mudguards. I fit them as standard on any of my or my friends bikes now, as at £30 they offer good value and look great.

Fitting a mudflap is essential in keeping additional dirt and water from flicking on you. I opted for a Brooks leather one. It's holding up just fine despite some people having reservations about it being leather. It'll last many years to come and during all that time the bike looks better for it.

The Shimano Deore Hollowtech 2 chainset has gone. I never really liked the sporty look of it and have enjoyed going back to a square-taper bottom bracket as it allows me to choose the width of the bottom bracket and hence get the chainline spot on.

A good value alternative is the Stronglight Impact with Shimano UN55 bottom bracket. I've opted for a 26/36/46T set of chainrings to give me plenty of range and a 118mm bottom bracket to achieve the circa 50mm chainline required for a Shimano MTB front mech.

And yes, the chainset is "polished". I spent a weekend sanding the anodised finish off it, getting covered in black mess and finally polishing it. 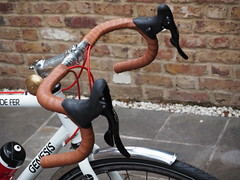 Gone are the 31.8mm handlebars as they look so ugly, and I'm not a heavy rider. Instead I've put a new stem with 26mm clamp and a set of Nitto Noodle M177's. They're fantastic handlebars, very comfortable and they look great.

Add to that I've now wrapped them in leather instead of generic bar tape. Personally, I find leather has a far nicer grip and feel to it. Plus it'll last much longer and look better as it ages.

And finally a bell! I can't believe I didn't have one before. Function over weight, and it actually looks quite good (an accessory). I bought a Lion bell, not cheap, but UK made (support local business in all) and top quality.

I've switched to an 8-speed cassette rather than a 9-speed with the hubbub hack. It's just far smoother and less problematic. Also 11-30T cassettes are easy to find and very cheap at around £10. The 30T gives plenty of gear inches for getting up hills especially when combined with a 26T inner chainring.

I also found an old/retro 8-speed XT rear mech. It looks better than the newer ones and has a barrel adjuster built in (something they've annoyingly removed from newer models). Found courtesy of eBay.

So that concludes my changes to the Genesis Croix De Fer. There are a couple of other changes I'd like to make but they're largely aesthetic so can wait. a) a silver/polished seatpost, b) a silver/polished headset, c) some new handbuilt 36-spoke wheels, d) one day... either some BB7 brakes or the newer style of dual-sided mechanical disc brake (TRP Spyres).