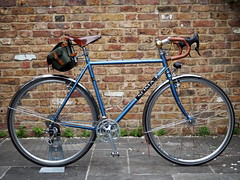 Earlier in the year I noticed a fault on my Soma Double Cross DC. On one of the rear brake bosses the boss was separating from the seat stay and the seat stay was dented slightly. I went back to some earlier flickr photos I took of the frame when I first received it and could just about make out the fault. Something I'd not initially noticed and probably occurred during manufacture or transit (most likely). I contacted Soma UK and after about 7 weeks via warranty process (very quick turnaround, awesome work Soma!) I was presented with a new frame! For the most part I just transferred the components across from my damaged bike to the new frame, but I did of course indulge in a couple of new additions during the rebuild.

I did my standard prep of sealing the frame with linseed oil to reduce the chance of internal rust. There are other, arguably better alternatives, but I've always got a bottle of linseed lying around from doing any wood-work and it fulfils the job of stopping internal rust very well. The headset was then faced at the local cycle shop to ensure a perfect headset contact and fit.

Fitting the mudguards was a pain as usual. Not overly difficult, but it takes time and patience to get them just perfect. I've accrued over the years a nice box of washers, screws, nuts, brackets etc... so there's always something that will ensure the perfect fit. In my case I used some basic and cheap "L" brackets I purchased via eBay a long time ago (they cost no more than £3 for about 100!) and secure the mudguards very well.

The biggest change was the move away from v-brakes (with travel agents) back to cantilever brakes (Tektro CR720's) as I was sick of travel agents. People tend to moan about cantilevers a lot but I find them very effective. No harder to set up than v-brakes, and much easier than mini v-brakes (due to the close rim clearance they require). One thing cantilevers do lack is the power of v-brakes, so getting them set up perfectly is essential. I've set mine as low as possible, so they're almost resting on the mudguards. This gives me more than enough braking power. No squealing or noise, just the occasional judder at low speed. All done using Koolstop salmon pads.

I decided to change to a set of Nitto M177 Noodles for my handlebars having liked the exact same bars on my former (now my brother's) Croix De Fer. I switched to a 90mm stem (from 100mm) to account for the longer reach the Nitto's have over my older Ritchey Classic handlebars. Not only do I find the bars more comfortable but they look better. 26mm sized bars look far, far more aesthetically pleasing than 31.8mm. I won't ever be going back to 31.8mm.

I decided to move away from the 9-speed hubbub Shimergo set up to an 8-speed one. This was something I did on the Croix De Fer too. Simply put, the shifting is much cleaner and easier to set up. 9-speed can be a pain to get it set shifting to every gear perfectly. The 8-speed mechs still have barrel adjusters on them (newer 9's don't), and look far better. And 8-speed cassettes are insanely cheap and offer perfect ratios, 11-30T for £9!

Getting rid of Google

As part of my venture into improving my personal privacy I've finally taken the plunge and started to de-Google (ie become less reliant on Google's se...